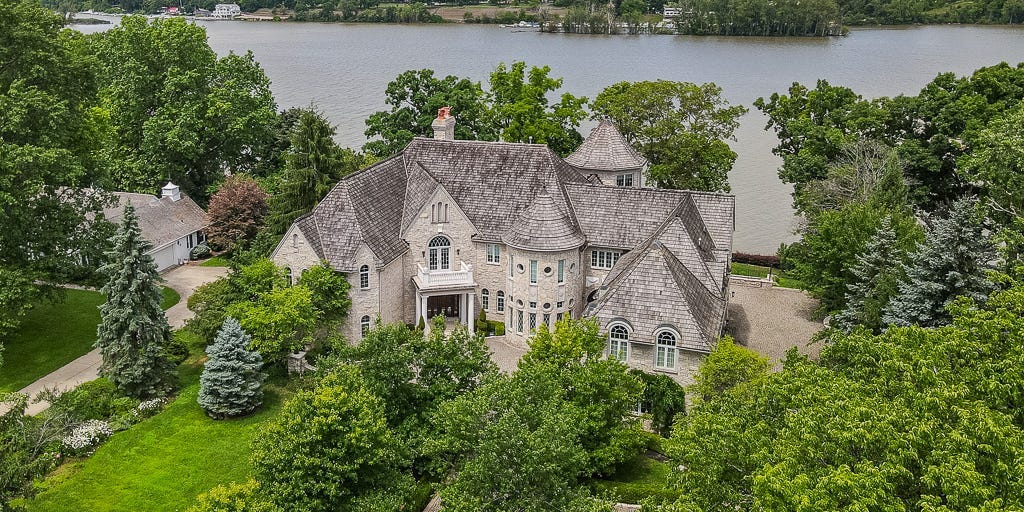 Waterfront castle in Ohio is listed for $2.59 million: photos

Bradley Delp spent four years building a six-bedroom castle on the Maumee River in Rossford, Ohio. He estimates that he spent over $6 million in construction costs.

The home sits on a 1.17 acre lot and comes with a private dock as listed. The three-story house has 18 rooms, including a home cinema, a cellar and a children’s playroom.

“It took four years to build the new house because there was an existing house on the land that we had to tear down,” Delp told Insider.

Much of the furniture and interior fittings were customized to his liking, adding to the cost and time spent, he said.

Despite the effort it took to build the house, it was hardly ever lived in. The Delps moved to Florida in 2009, two years after it was completed, and the house has stood empty ever since.

More than a decade later, he’s selling the property for $2.59 million, “less than half what it cost to build,” according to the listing.

This isn’t Delp’s first time trying to sell the property: The home has been on and off the market since it was first listed for $3.97 million in March 2018, records show.

There are currently 25 homes for sale in Rossford, with a median listing price of $170,000, per real estate platform Realtor.com. The $2.59 million waterfront castle is the most expensive listing available at the moment.

Delp worked with an Italian architect to design his dream home in the style of Old World architecture, which relies heavily on the use of stone and wood.

This architectural style is heavily influenced by old European mansions, which include features such as exposed beams and arched doorways.

“Old World architecture has always fascinated me. I followed that theme and it ended up turning into a castle,” Delp said.

The kitchen features marble columns and vaulted brick ceilings, which were laid by hand, Delp said.

“The architect told us we couldn’t do that, and here I give credit to my wife. She said, ‘Yes, you can. It’s like the back of an umbrella.’ They took that and went to work,” he added.

A floating staircase leads from the main entrance to the second floor. At the top of the stairs, a reproduction of a Revolutionary War painting covers an entire wall.

“I’m a fan of the Revolutionary War and this is a reproduction of ‘The Battle of Bunker Hill’ by the most famous painter of that period – John Trumbull,” Delp said.

A Detroit artist reproduced the painting on wallpaper and even hid an Easter egg in it at Delp’s request.

“In John Trumbull’s real photo, the flag they are flying in the photo is the English flag because we lost the battle of Bunker Hill. But in my photo, I changed the flag from the Union Jack to the stars and stripes,” he said. said.

Due to the size and weight of the floating staircase, it had to be customized by a craftsman in Canada, he added.

Delp designed a nautical-themed bedroom for her son, which is located in one of the house’s turrets and has a circular floor plan.

Along with themed furniture, the room also has round windows that look like portholes on a ship.

“Atop his bedroom we wrote a quote. It says ‘Red at night, sailors’ delight.’ Red in the morning, sailors beware,’ he added.

Large windows offer nearly 180 degree views of the landscape outside.

“Whether it’s spring, summer, fall or winter, the view is just spectacular. It doesn’t feel like work when you’re up there,” he said.

9 bedroom design ideas to decorate around a navy blue sofa

Unbuilt Scottsdale Mansion listed for $32 million, most expensive in Arizona