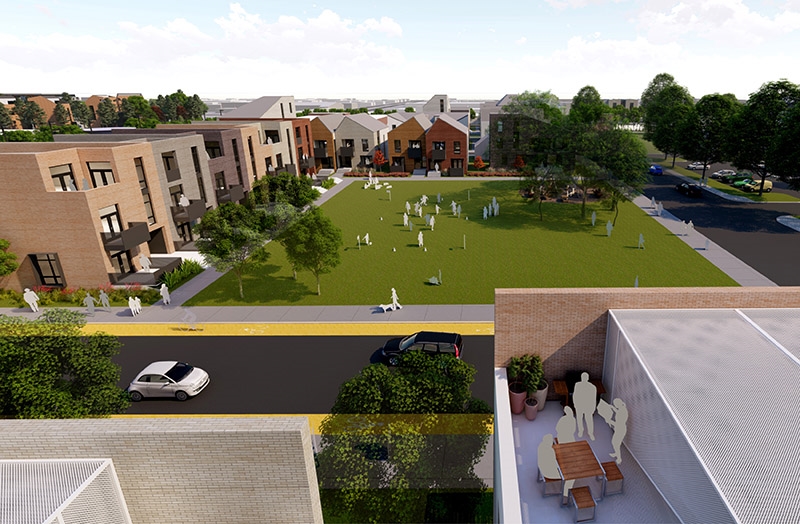 
Rendered courtesy of U of A Community Design Center

The U of A Community Design Center is honored with two prestigious awards as part of the 2022 American Institute of Architects Honors and Awards Program. The center received the Collaborative Achievement Award, while the center’s Re-Live Downtown Pine Bluff project won an Honor Award for Regional and Urban Design.

The AIA Honor Awards program is the top national design awards program for architecture, urban design and interior design. This year’s award-winning projects and other winners will be celebrated at the AIA’s annual Architecture Conference and Exhibition, June 22-25 in Chicago.

During this summer celebration, Marlon Blackwell will also officially receive the 2020 AIA Gold Medal, which was delayed due to the COVID-19 pandemic. Blackwell, a Fellow of the American Institute of Architects, is Emeritus Professor and E. Fay Jones Chair in Architecture at the U of A’s Fay Jones School of Architecture and Design, where he has taught since 1992.

Blackwell, founder of Marlon Blackwell Architects, is the second practicing and teaching architect in Arkansas to receive the Gold Medal since the program began in 1907. Fay Jones, FAIA, longtime teacher and founding dean of the Fay Jones School, received the AIA Gold Medal in 1990.

The AIA Collaborative Achievement Award recognizes and encourages the distinguished achievements of design professionals, clients, organizations, architectural teams, knowledge communities and others who have had a beneficial influence on the architectural profession or have advanced it. The U of A Community Design Center joins Joseph P. Riley, Jr., Hon. AIA and AIA New York Unified Task Force City and State as recipients of the 2022 Collaborative Achievement Awards.

During his 10 four-year terms as mayor of Charleston, South Carolina, Riley transformed the city into a premier cultural destination and positioned himself as one of the most visionary and successful leaders. effective in the country. In 1986, he founded the Mayors Institute of Urban Design, which has helped transform communities through design by preparing mayors to become their cities’ leading urban designers. Fay Jones School alumnus Trinity Simons serves as the institute’s executive director.

At the start of the COVID-19 pandemic, the AIA New York Unified Task Force City and State was formed in just 24 hours in response to an urgent call for help from design professionals. A group of architects from AIA New York and AIA New York State worked through the night to identify buildings that could be used to increase bed capacity and ease the strain on New York’s overwhelmed hospitals.

The University of Alberta Community Design Center has been recognized for its more than 20-year record of excellence in its efforts to have a meaningful impact on communities facing significant challenges. The center was founded in 1995 as the research and outreach center of the Fay Jones School of Architecture and Design. It is directed by Stephen Luoni, professor emeritus and holder of the Steven L. Anderson Chair in Architecture and Urban Studies at the Fay Jones School.

“The AIA’s national recognition of the accomplishments of the U of A Community Design Center affirms the Fay Jones School’s overall educational mission and public service ambition: to strengthen Arkansas and the nation through design for the greatest great good,” Dean Peter MacKeith said. “Our long investments in the leadership and staff of UACDC have been of ultimate benefit to the citizens of the state, as much as to our students and the reputation of the school and university. I commend the Professor Luoni and all UACDC staff past and present, and look forward to a similar, if not greater, impact in the future.”

Under the leadership of Luoni, who has served as only its second director and lead designer since 2003, the center’s work has gained national recognition and positioned it as one of the most respected authorities in design and development. urban. Luoni has transformed the center into one of the few design-based education centers in the country with a professional design staff – an infrastructure missing in the design professions. Students from all disciplines at the school collaborate with the center’s small, full-time professional staff on project development and public benefit scholarships.

Despite its significant work outside of Arkansas, the center’s primary mission is creative development in the state and for the state through a combination of design, research, and education solutions. The center works within multidisciplinary frameworks to address the “triple bottom line”, simultaneously solving social, economic and environmental challenges in the built environment for project developers.

In her Collaborative Achievement Award nomination letter, Marleen Kay Davis praised Luoni and the center he has led for nearly 20 years. Davis, FAIA, is the former Dean of the University of Tennessee, Knoxville College of Architecture and Design and is an ACSA Professor Emeritus.

“I have always been impressed with how he leveraged every opportunity to use his role as a faculty member at a state university to make a major impact, nationally and regionally, with projects both big and small,” she said. “The work is an impressive and invaluable national resource for architectural educators and communities. As you experience their work, you will be impressed by the range of imaginative design innovations, the high standards of design excellence, and the long-term impact.”

Through its design and planning services, the center has addressed design challenges in more than 50 communities and organizations, including those in Little Rock, Fayetteville, Greers Ferry, Texarkana, Conway, Maumelle, Vilonia, Mayflower, Hot Springs and Bentonville. The center’s urban design projects have won more than 180 design and planning awards, and the center’s work has helped clients and sponsors secure more than $70 million for improvements.

“The Fay Jones School of Architecture and Design’s long-term investment in the Community Design Center has given us the infrastructure and human resources to maintain national design leadership on the grand challenges of urban design including resilience, disaster recovery, affordable housing, agricultural urban planning, watershed urban planning and local economic development,” Luoni said. Instructional design connects academia and practice as it synthesizes the necessary knowledge, skills, values, and opportunities for action that are not available in a pure classroom setting. Although we’re one of only three or four such centers in the country, design centers are what universities owe to their audiences, and I’m proud to be a part of this Arkansas idea.”

Re-Live Downtown Pine Bluff was one of four projects awarded under the 2022 Regional and Urban Design Awards program, which recognizes the best in sustainable and inclusive urban design, regional planning and local development. The four-member jury considered how the projects considered the built environment, local culture and available resources, modeling the promise of architecture and its true value to communities.

The Re-Live Downtown Pine Bluff plan aims to revitalize Pine Bluff, Arkansas, the nation’s fastest-shrinking city, with a housing-focused approach to help reverse the impact of widespread demolition that has produced over the past 40 years.

The project focuses on building neighborhoods, not discrete housing projects, to help Pine Bluff achieve ambitious capital development goals. More than 400 units of “missing intermediate housing”, which include communal micro-apartments, multi-generational housing and collective housing that reflect the social needs of the city, will be built around neighborhood green nodes. The plan proposes 28 walk-in housing prototypes of varying spans that would be ready for potential owners.

The framework also outlines iconic streets and projects that support the residentialization of downtown Pine Bluff by supporting an experience economy.

The Living Streets Platform converts oversized one-way corridors into avenues of off-road social services, such as public art, dining, and recreation. Signature public works will include the redevelopment of the city’s theater district and the creation of the Delta Blues & Bayou ArtWalk, which will celebrate black artists who performed regularly at Pine Bluff.

This is the first time Pine Bluff has had a revitalization plan and effort built by and for black constituencies. The city has committed $700,000 to acquire 5.25 acres of downtown property for Phase I development and over $3 million for blight removal.

“The high regard for the Re-Live Downtown is a testament to the need for its implementation,” said Ryan Watley, CEO of Go Forward Pine Bluff, Inc. have done. Thereafter, we are actively seeking partners to help us build the initial subdivision.”

This is the 14th AIA Honor Award the U of A Community Design Center has received; all were in the Regional and Urban Design category.

Meet Pacaso, the app helps you buy a luxury home with 7 other people – Robb Report