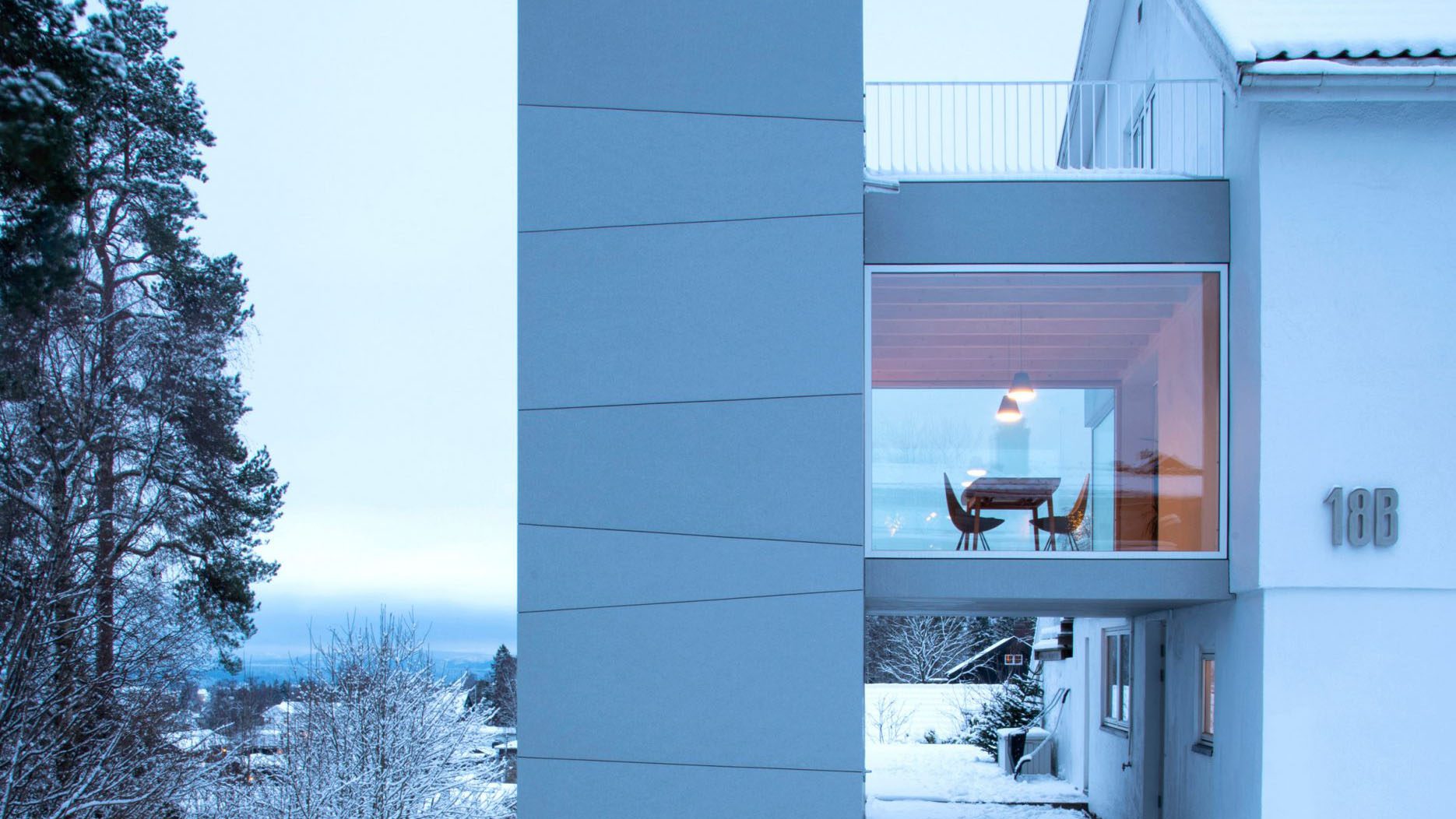 Architectural firm Resell + Nicca added an extension to a semi-detached house in Oslo comprising a tower connected to the existing living spaces by a glass bridge.

Resell + Nicca was approached in 2019 by a couple who had just given birth to their third child and wanted to expand their semi-detached house.

The site of the property at the top of a slope offered good views to the south, but presented significant challenges for the construction of the new addition.

Local planning regulations indicated that the extension must increase the overall amount of usable outdoor space on the plot in order to receive a building permit. This was difficult to achieve while increasing the internal surface area and negotiating the awkward topography.

The architects proposed a tower-shaped structure positioned on a part of the slope considered too steep to be included in the existing outdoor space. A roof terrace incorporated at the top of the tower provides the necessary additional outdoor living space.

“We wanted the extent of the narrow slope to visually define the width of the extension,” said architects Olav Resell and Nicca Gade Christensen, “and we wanted the structure to have a distinct vertical appearance – which means we needed to improve the perception of ‘tall and narrow’ – without compromising the functional aspects. “

The new structure extends from the southeast facade of the existing building and overlaps an open space used to meet customer demand for a carport.

An entrance at the existing ground level gives access to a staircase connecting the new living spaces above with a studio on the lower level.

The studio extends under the carport and communicates with the lower level of the garden, which was previously considered inaccessible.

The tower tapers off at both ends but flares outward on its southeast elevation to maximize internal floor area and capture views of nearby pine trees.

The verticality of the structure is reinforced by the extension of the exterior cladding so that it rises above the adjoining bridge. The cladding forms a balustrade around the roof terrace, while a slender railing on the connecting section emphasizes the feeling of separation from the main building.

The deck unit contains a new dining area, connected to the living room and kitchen of the existing house. Full-height glazing on either side of the dining room offers views of the surrounding area and the distant Oslo Fjord.

The living areas extend across the deck and into the tower, where a guest bedroom and home office are arranged above the new entrance.

The tower is clad in fiber cement panels which were chosen because they could be precisely cut and applied to create a matte finish surface that complements the slightly rougher mortar walls of the existing house.

“We wanted a facade material that could enhance both the shape of the tower and the details around the windows on the east facade,” added the architects.

Unlike the clean and understated exterior, the interior of the extension features a lot of wood which brings warmth and texture to the living spaces.

Spruce structural elements combine with walls and railings constructed using birch plywood panels. The ceilings are covered with aspen and the doors, floors and windows are of pine.

The entrance area features a large bay window with a frame that extends at its base to form a bench.

The stairs leading to the upper and lower floors are lined with storage space and a circular window leading to the first floor overlooks the pine forest.

Resell + Nicca is an Oslo-based architecture studio founded in 2015, formerly known as Resell Arkitektur. In 2016, he collaborated with Pir II on the design of the Cabin Ryfylke in Norway, which features a patterned facade made of slate shingles.