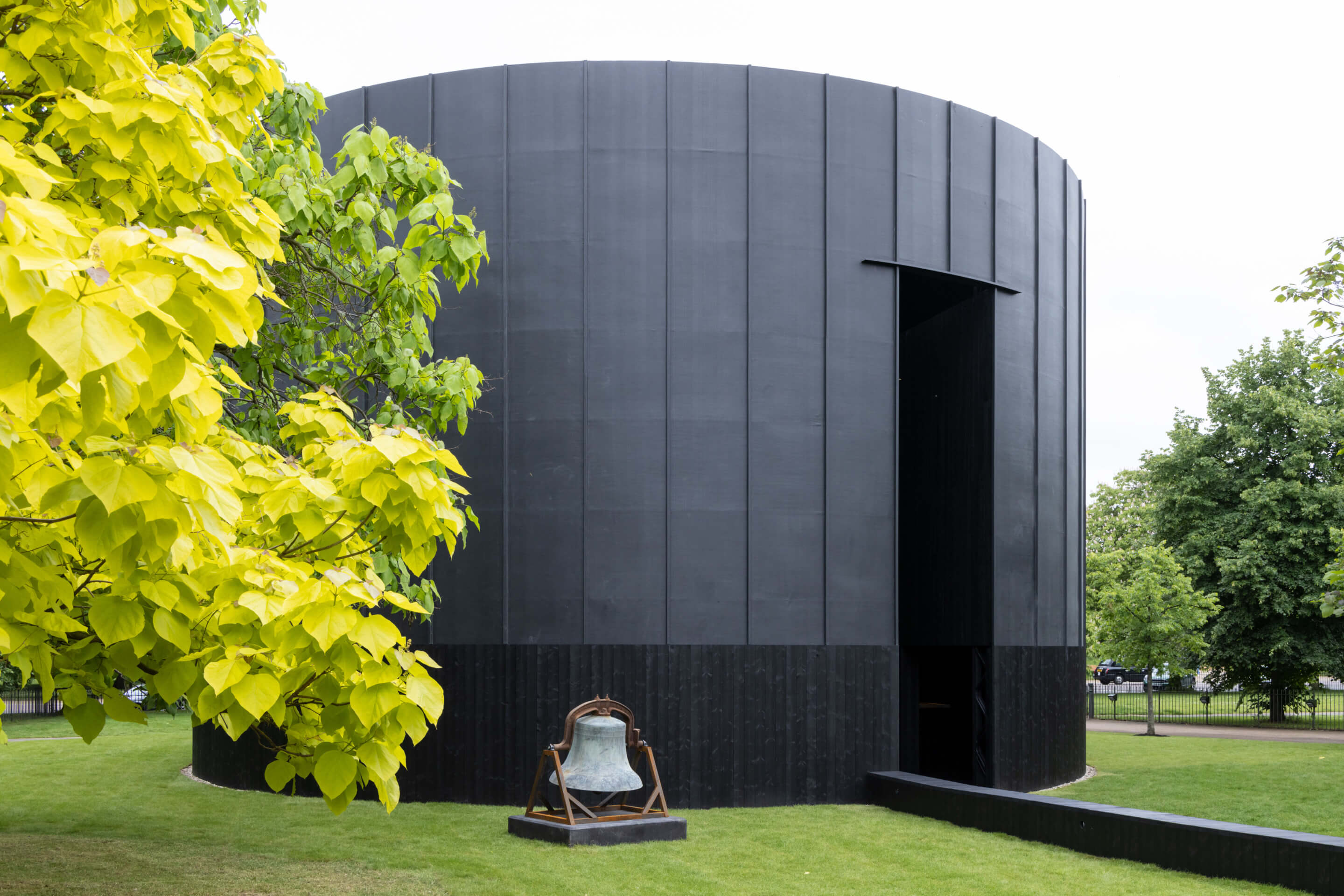 Theaster Gates, Chicago-based social practice artist black chapel is to debut in London’s Kensington Gardens as the first non-architect commission in 22 years of the Serpentine Pavilion, the Serpentine Galleries’ annual flagship program of temporary architecture. For his black chapelwhich opens to the public on June 10 and kicks off a full season of creative summer programming hosted by the Serpentine, Gates has received architectural assistance from Adjaye Associates.

On June 8, Gates will be joined by David Adjaye, who also served on the Serpentine Pavilion Selection Committee this year, for a discussion with Serpentine Artistic Director Hans Ulrich Obrist about their “work in art, architecture, urban planning and the creation of space” to mark the opening of this year’s pavilion.

Gates said in a statement:

“The name black chapel is important because it reflects the invisible parts of my artistic practice. It recognizes the role that sacred music and the sacred arts have had on my practice, and the collective quality of these emotional and community initiatives. black chapel also suggests that at this time there could be a space where one could rest from the pressures of the day and spend time in quietude. I have always wanted to build spaces that see the power of sound and music as a healing mechanism and an emotional force that allows people to enter a space of deep reflection and deep participation.

Envisioned as a space for “gathering, meditation and participation”, black chapel was inspired in part by the meditative qualities – “the transcendental environment” as the Serpentine put it in a press release – of Rothko Chapel in Houston. As previously detailed by A when Gates’ design for the Serpentine Pavilion 2022 was first unveiled last February, the work’s oculus-topped cylindrical shape nods to British craft traditions, particularly ceramics (and the enormous bottle kilns that enabled industrial-scale production in Stoke-on-Trent) as well as the beehive kilns of the western United States, San Pietro and Roman tempiettos, and traditional African building structures such as huts of Musgum mud from Cameroon and the Kasabi tombs from Kampala, Uganda.

Placed next to the entrance to the pavilion will be a bronze bell salvaged from St. Laurence, an iconic Catholic church on Chicago’s South Side that was demolished in 2014.” Highlighting the erasure of gathering and spiritual communion spaces in urban communities, the historic bell will act as a call to assembly, congregation and contemplation throughout the events of the summer,” the Serpentine detailed in its announcement.

Organized by guest curator Bianca A. Manu and Yesomi Umolu, director of curatorial affairs and public practice at the Serpentine, these upcoming events are expected to include experimental musical performances, sound interventions, clay workshops organized by Mud Gang Pottery CIC, round tables, a Japanese tea ceremony show and other “artistic explorations of the monastic”.

Hanging inside the pavilion are a series of seven new tar paintings created by Gates that pay homage to his late father, a roofer and builder by trade. “With the recent passing of my father, the pavilion feels like a memorial, not only to the legacy he shared with me, but also to how his calling became my calling,” Gates explained in his statement. artistic. “black chapel seems to have ways of working. Through space, the ship produces ways of being together and ways of understanding each other by being adjacent. black chapel is a ship and a container for those who choose to gather.

black chapel also shares a name and serves as a continuation of a 2019 installation by Gates at Haus der Kunst in Munich, an “attempt to bring black spiritual life” to a museum originally built for the Nazi regime in 1937. “My pavilion black chapel continues my professional investment in creating and preserving structures for spiritual possibility,” Gates said.

Constructed from stained and sustainably (and ethically) sourced wood, the Serpentine Pavilion 2022 is a relatively lightweight affair (at least compared to last year’s massive steel and concrete facility designed by studio sud -African Counterspace). In particular, the material composition of the pavilion has peripheral links with A as it is the first international project carried out under the Design For Freedom initiative of the Grace Farm Foundation. Design For Freedom/Grace Farms, which served as the Responsible Materials Advisor for the 2022 Serpentine Pavilion, was first conceived by Grace Farms Founder and CEO Sharon Prince and Bill Menking, the late co-founder and editor. boss of The architect’s journal, in the fall of 2017 to raise awareness of forced labor within the AEC industry and implement ways to eradicate it completely in favor of an ethical supply chain untainted by human suffering. Design For Freedom was officially launched in October 2020 and held its inaugural summit at the Grace Farms campus in New Canaan, Connecticut last March.

In her role as Materials Advisor, Grace Farms worked alongside Serpentine and Technical Advisor AECOM to trace the timber and plywood used to construct the pavilion as well as its concrete, steel trusses and waterproofing membrane. “The team has engaged with suppliers and manufacturers to trace and document these materials as far upstream as possible in the supply chain, creating transparency and reducing the risk of forced labor and child labor in products used to build the pavilion,” Grace Farms said in a press release.

“It is an honor that Design for Freedom by Grace Farms is collaborating with Serpentine to assess the ethical sourcing of building materials for the 21st Serpentine Pavilion,” Prince added in a statement. “This first completed international Design for Freedom project accelerates the growing movement to eliminate forced labor from the building materials supply chain. Grace Farms looks forward to strengthening this partnership with shared programming this year in the United States at Grace Farms and Serpentine.

black chapel will remain visible until October 16 and is open daily from 10 a.m. to 6 p.m., except June 30 when it will be closed to the public and will reopen the following afternoon. All events at the Pavilion are free to the public, unless otherwise specified by the Serpentine. black chapel also concludes the two-year investigation The question of claya collaboration between the Serpentine, the Victoria and Albert Museum, the Whitechapel Gallery and the White Cube which saw Gates investigate the role of clay in craft, work, history, colonialism, religion and all the other possible aspects through sculpture, cinema and now architecture.

Goldman Sachs is the Serpentine Pavilion’s featured partner for the eighth consecutive year with Therme Group and the Luma Foundation as supporting partners.

Renovation of the Month: Easy Interior Design Updates for Your Reston Home