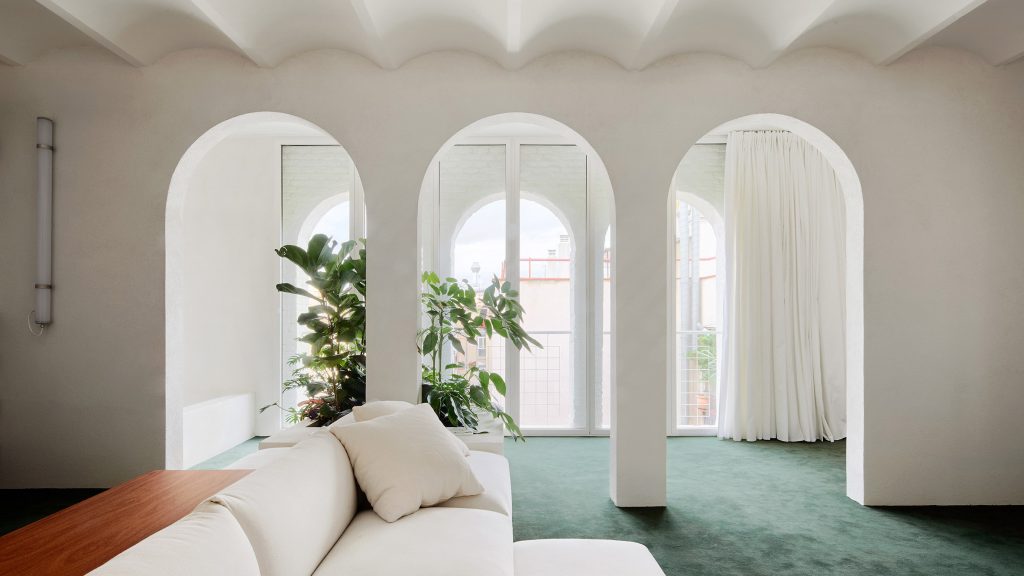 In this lookbook, we’ve collected 10 home interiors that use archways to punctuate spaces and elevate the transition between rooms.

An arch is a curved structure that spans an opening, usually to distribute weight over it. Due to their structural efficiency, arches have been used since Roman times for the construction of bridges and aqueducts.

Arches have been reinterpreted throughout history and are often used to evoke classical or traditional architecture.

They can add charm and architectural detail to doorways, entryways and passageways in residential spaces, and are often framed with ornate moldings to create a sense of grandeur.

Arched openings can also be used to mark transitions between rooms and punctuate otherwise plain walls in contemporary interiors.

This is the latest in our lookbook series, which is visually inspired by the Dezeen archives. For more inspiration, check out previous lookbooks featuring homes with striking railings, interiors with the Eames Chair, and living spaces with decorative use of tile.

Spanish architecture studio Sierra + De La Higuera has revamped this Madrid apartment by arranging open-plan living and dining areas on either side of a wood-paneled entrance hall.

The studio added two arched openings in wooden frames in the center of the hall, creating an intimate buffer zone in the open apartment.

Canadian company StudioAC inserted a box joinery with a large arched cutout into this open rectangular apartment in Toronto, separating the bedroom from the living space.

The box’s punchy entry and lowered wall height help mark the transition from the open living space to the cozy sleeping nook.

Apartment of the Diplomat, Italy, by 02A

This one-bed apartment in Rome was designed by architecture and interiors studio 02A to adequately showcase the owner’s extensive collection of furniture and antiques.

A vaulted passage with a built-in library leads from the living room to an intimate dining room. The change in space is also indicated by the change in pattern of the solid oak flooring.

Learn more about the Diplomat’s Apartment ›

Greetings from Rome, Lithuania, by 2XJ

The arches reminded the architects of the Colosseum in Rome, giving the project its ironic name – Greetings from Rome – and leading the studio to clad the wall in the material used for the exterior walls of the monument, Italian travertine.

Learn more about greetings from Rome ›

For his own apartment, Italian architect Fabio Fantolino revamped the 1930s extension of a lavish 19th-century building in Turin by introducing bright green and blue color accents.

The studio also added large arched openings in the millwork, which were illuminated by 15th-century oil paintings of biblical figures under tall archways.

This house in Akishima, Tokyo, was designed by Japanese architecture studio Office M-SA around a series of exposed concrete elements, including a staircase that crosses an arch that separates the kitchen and dining room from the desk.

The concrete elements were designed to be permanent anchor points for the construction of the wooden walls of the house, which can be modified or extended in the future to meet the needs of the owner.

Read more about House in Akishima ›

A room for two, UK, by Studio Ben Allen

Built inside a flat in London’s Barbican Estate, this plywood structure designed by architectural firm Studio Ben Allen transforms the room into a pair of bedrooms and an office for two children.

The cut-out arches, which mimic the barrel-vaulted shape of the housing estate’s terraced apartments, indicate the entrances to each child’s space.

Read more about A room for two ›

Half-timbered house, France, by 05 AM Arquitectura

Spanish studio 05 AM Arquitectura aimed to incorporate a contemporary aesthetic while retaining the traditional features of this 19th-century home near Paris.

The studio removed the partitions in the archways between the kitchen, dining room and living areas to connect the spaces and improve natural lighting while retaining the ornate wall moldings that frame the openings.

Find out more about the half-timbered house ›

The PMAA architecture studio has divided the living space of this Barcelona apartment with partitions punctuated by a series of arched openings.

A large modular sofa dominates the living space and is transformed around the columns of the arcades. The geometric repetition of the arch was informed by the vaulted ceiling and arched windows of the apartment.

Learn more about the Penthouse ›

This is the latest in our lookbook series, which is visually inspired by the Dezeen archives. For more inspiration, check out previous lookbooks featuring homes with striking railings, interiors with the Eames Chair, and living spaces with decorative use of tile.