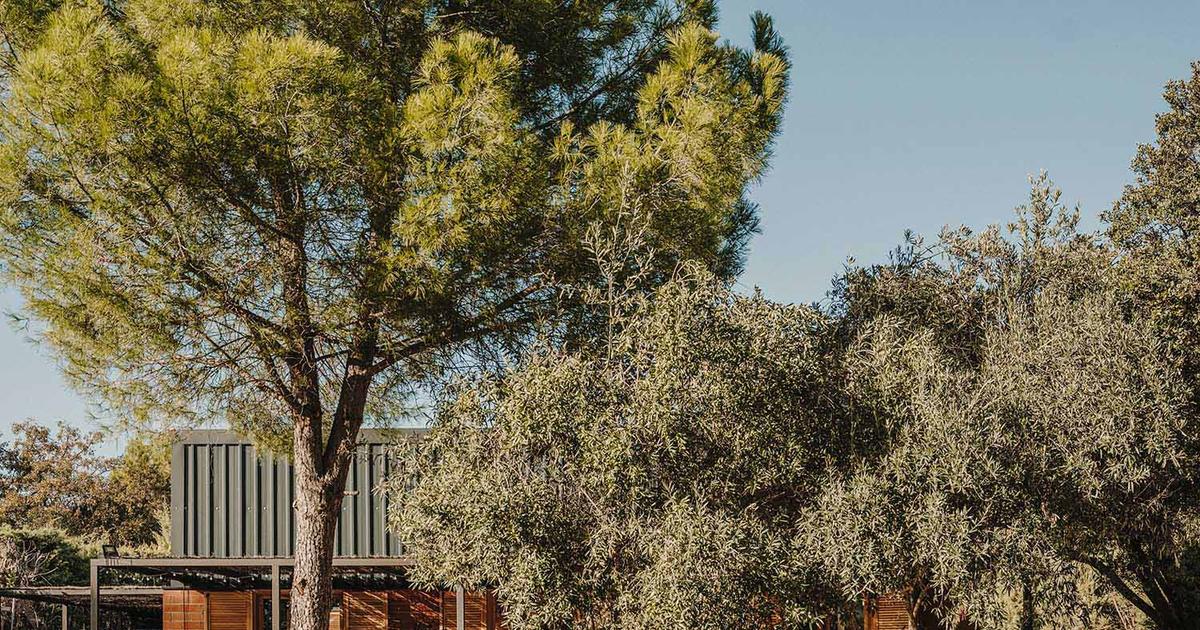 Spanish architects build a compact house with a ventilated facade

Spanish architectural firm Slow Studio recently completed a compact and sustainable family home in Madrid featuring a ventilated facade. Nicknamed Casa en Cerros de Madrid, which translates to House in the Hills of Madrid, the residence is built on a narrow plot with a narrow south-facing facade.

The 10-meter-long (32.8-foot) plot challenged the architects to create a comfortable family home for four, while capturing as much natural light to meet passive house standards.

The studio came up with the idea of ​​creating a quadratic floor plan, which would allow for good natural light and air circulation, while providing total connection between the interior spaces.

“The elongated shape of the land determined the project,” said Slow Studio. “We have a narrow facade of only 10 meters long; in addition to looking for compactness and total connection between the rooms, led us to look for design options that allow the introduction of light and solar heat inside.

Working with the square floor plan, the studio adopted two distinct strategies to capture as much natural light as possible throughout the day. At first, a side patio was created, which allowed the creation of a new south-facing facade located at the back of the house.

Second, a series of openable slates in the raised roof act as skylights and filter natural light into the central parts of the house. In addition, the slats located along the north facade allow cross ventilation throughout the house. The south facade also has a large porch to protect the house from the strong summer heat.

Casa en Cerros de Madrid is built with a laminated wood structure and insulated double brick walls to achieve optimal interior thermal inertia. The use of wood is present throughout the interior of the house, providing a warm contrast to the cold concrete floor and the industrial-inspired sheet metal roofing and shutters.

The interior of the house includes an open living room, a large modern kitchen with adjoining dining room, two large bedrooms, two bathrooms, a dressing room and a home office. A second sitting area with open log fire is cleverly connected to the master bedroom.

Separated by floor-to-ceiling wooden slats, the master bedroom can open onto the living room or be closed off for more privacy. The clever design allows sunlight from the bedroom to enter the living room and the warmth of the log fire to warm the adjoining bedroom.

The fireplace is also connected to a thermal stove which, when in use, heats water for the bathrooms and interior heating. Additionally, the home features a central interior courtyard that acts as a magnet for natural light, while also serving as an ambient living room.

“The house allows a large number of interior circulations and can be understood as an open loft in which all the rooms are connected and in which it is possible to make each space independent according to its use”, explains the studio. “Having a very compact floor plan is, in itself, a key strategy for reducing energy loss through the facade. A compactness that is interrupted only by the irruption of a patio that allows us to gain sun in the room to the north.

Minimal exterior paving or landscaping has been incorporated, to respect the pre-existing garden and trees, while allowing the centuries-old olive trees to naturally cushion the house from the heat.

Stockton Record readers send in architecture for a photo challenge