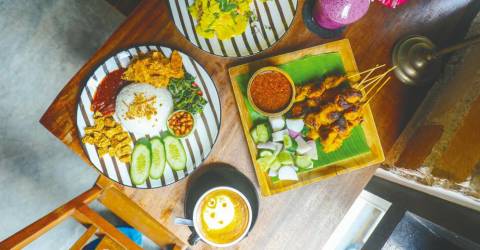 Satisfy your cravings at the Hungry Tapir

The Hungry Tapir serves a fresh and delicious plant-based menu that stays updated to satisfy patrons’ palates while providing an Instagrammable atmosphere.

THE The first thing one notices upon entering The Hungry Tapir is sunlight streaming through a square skylight, illuminating the entire first floor. Light illuminates the long vegan cocktail bar, which offers different types of drinks, from cocktails to coffees.

The interior is filled with an eclectic collection of vintage furniture in various shapes and sizes, as well as colorful paintings.

Then there’s the Instagrammable open terrace with a pink wall, at the back of the cafe, on which stand raised concrete steps, hand-painted with plant leaf designs.

The first-floor bar, located above the Loong Cafe in a row of old shops, has the charm of a heritage building on Petaling Street.

The cafe and restaurant are owned by a mother-daughter duo – Cynthia Rodrigo and her daughter Makissa Sophia Smeeton, graphic designer-marketer and interior designer.

“We love Chinatown. It’s the last major cluster of heritage buildings,” Smeeton said, explaining why they focused on this particular location.

They were part of a large group of shoppers visiting the site, but everyone else walked out after taking a single glance at the once dingy, dark and dirty room.

“Originally it was a backpacker hotel, painted orange, very dark, poorly maintained with a low ceiling. [But] we fell in love with it immediately,” Smeeton said.

The interior decoration was entirely done by them. “Our style is very black and white or monochrome. We wanted a touch of pink, yellow and turquoise, and lots of plants,” Smeeton said.

“We went to Sri Lanka in 2019 and took samples from a textile factory. When we opened this place, we pulled out the samples and placed the order.

“We covered everything. The tables are made from reclaimed wood. We found used furniture and did the upcycling ourselves.

“We wanted to be a very sustainable environment, and we used pre-loved or repurposed items as much as possible to accommodate our plant-based, vegan lifestyle. I believe in sustainable living and that’s why I chose to go vegan for seven years.

The two have always wanted to open a café, but never had the chance.

“We wanted a cocktail bar because we saw a gap in the market at that time,” Smeeton said.

They realized that in Malaysia people usually go vegetarian for religious or health reasons, but they wanted to approach it from a lifestyle perspective – they wanted to be a place where people could hang out at night, drink a drink and enjoy a vegan meal without any restrictions.

“We have plant-based cuisine with cocktails in the evening, and that can be enjoyed by everyone, vegan or non-vegan,” she said.

The menu at The Hungry Tapir includes both local and Western cuisines, as well as ‘East and West’ fusion dishes to maximally satisfy the Malaysian palate, with local ulam, spices and herbs incorporated into the dishes .

At the same time, they also offered their own vegan version of Malaysian food. Smeeton and his team spent hours, sometimes days, coming up with innovative ideas.

“‘Jackfruit Roti Jala’ is one of our greatest accomplishments,” she said proudly.

Unlike any other roti jala, the vegan version is not made with dairy products such as ghee, butter or eggs, nor with chicken gravy (vegans do not consume meat or sourced products animal).

Instead, the ‘clean’ yellow crepe comes with a spicy jackfruit curry and coconut raita.

“We made it with almond milk,” she revealed, adding that they made Tapir’s own Roti Canai, a crispy flatbread with dhal and sambal tempeh.

Smeeton recalled an amusing incident during one of their “research and development” processes.

She revealed that they tried to spin the vegan dough like roti canai experts at mamak restaurants, but it kept breaking and falling on their heads.

But some tests paid off.

“We have created our own special dishes and we change our menu twice a year. Since our opening in 2020, we have updated our menu about four times. If we notice that some dishes are not being ordered much, we replace them with a new dish to keep it fresh and exciting for our customers,” she said.

Tastes as good as it looks

Their signature dish is Mama’s Satay. It looked like chicken meat satay, but when I took a bite, I was pleasantly surprised by the familiar texture.

That’s when Smeeton revealed that it was actually pickled hedgehog mushrooms on skewers. I wouldn’t have guessed I was biting into a piece of mushroom if she hadn’t told me.

The satay was served with cubes of impit nasi, chopped cucumber and onion pieces with gravy or peanut sauce.

“Some customers were eating it, and they didn’t know it wasn’t chicken. It’s a hit when they don’t realize they don’t eat meat.

“It’s not fake meat or soy meat, it’s just mushrooms. We use natural meat instead of fake meat. We use vegetables from local farmers and micro-enterprises.

“In fact, our hedgehog mushrooms are sourced from the Cameron Highlands, and we also get our burger patties from Phuture Food, which makes plant-based meat suppliers.”

Another signature menu item is the Pink Bombshell Burger.

“It’s all pink – pink bun and pink patty. The burger patty is made with a mix of beets, chickpeas, mushrooms and more, topped with vegan cheese and caramelized onions,” she said. declared.

Then there is the delicious Nasi Lemak, with the traditional taste of rice cooked in coconut rice, aromatic sambal, hedgehog mushroom rendang, tempeh, greens, cucumber slices and peanuts crunchy.

The popular Egg Benedict is also veganized into “eggcelent” consisting of “tofu made into an egg-like mixture” and carrot bacon, a crispy slice of carrot with spinach, Hollandaise sauce on fresh sourdough.

When it comes to drinks, Tapir is popular for its mocktails like Tembikai-rita and cocktails like Jungle Tapir, Kombucha, smoothies with “super yummy superfoods” like Spirulina, Acai Berry and cafes.

One of the smoothies, Berry-kissa was rich in ingredients and tasty.

There’s something for everyone, even dogs! The clever chefs at Tapir have transformed their signature dishes – Mama’s Satay and Rainbow Ulam Fried Rice – into the beautifully named Mama’s Paw-Tay and Nasi Fur-ever Ulam, exclusively for furry creatures.

Pets also have their own place to ‘party’ and enjoy their meals, on the pink-walled patio just out the back.

For Smeeton, their intention is not to convert others to a whole new vegan lifestyle, but rather to open minds to the taste of vegan food.

“We want to change their perception of vegan food. ‘Vegan’ is not a salad on the plate. It’s fun and delicious, contrary to popular belief. If you happen to eat a tasteless vegan dish, don’t blame the food, blame the chef,” she joked.

“Our approach is to encourage others to eat less animal products and enjoy good food. In fact, 80% of our customers are neither vegan nor vegetarian, and that’s a win for us,” she added.