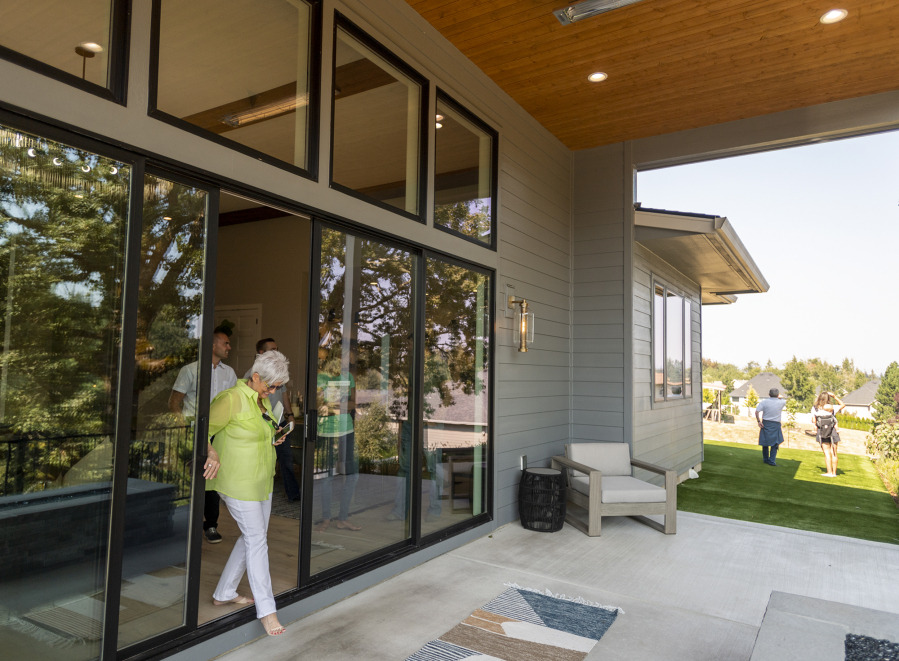 RIDGEFIELD — Walk in the GRO Parade of Houses neighborhood, I was struck by the grandeur and distinction of each of the six houses.

Each home showcases the latest trends and innovations, and each will cost its new owner over $1 million. But as I walked through the houses one by one, I noticed that the houses all had their own vibe and feel.

The first home, The Kousa, was designed and built by husband and wife team Jason Huyette and Lilli Arveli of Genesis Homes NW. The mid-century ranch style felt intimate, but still covers 3,305 square feet with three bedrooms, an office, and a home theater.

Arveli said she loves the connection between the house and the outdoors. The house, she said, has natural light, greenery and has a partially covered and heated outdoor living space. But she struggles to name her favorite feature.

“I designed the house,” she says. “So there’s no favorite part because it’s amazing.”

The next house, The Haven, is presented as a modern farmhouse with 3,300 square feet of living space. The home, built by Cascade West Development, has four bedrooms and a bonus room. The beautiful house has a chimney that stretches up to the sky.

Jason Stenerson of Cascade West Development pointed to the home’s two-story great room. The large windows will provide the new owners of the house with an abundance of natural light.

Next down the street is the Aletta House from Rivercrest Construction. With an area of ​​3,372 square feet, this house offers four bedrooms and an office, as well as four bathrooms. A standout space was the upstairs loft, overlooking the great room.

On Friday, Josh Dannenmann, a Cano Real Estate broker, represented the builder of that home.

“My favorite thing about this house is the floor plan,” he said. “It’s just super open.”

The house, he added, has lots of natural light, with high ceilings and a large large room. It also has an outdoor living center, which Dannenmann likes too.

The Wickenburg House was next, coming in at 4,075 square feet with four bedrooms and four bathrooms. The house, built by Affinity Homes, had a fun feature called a ‘Casita’, a semi-detached bedroom which I entered before I even entered the larger house.

The house “has a Southwest Hill Country vibe,” said John Colgate, one of the home’s builders.

“We really wanted to use the space even though we’re in a community and a neighborhood,” Colgate said. “We wanted it to feel very private here.”

The window and room locations were therefore very intentional, he added.

Looking down a side street, I saw a modern French country house, The Hazel Merrin, by Glavin Homes. The 3,360 square foot home offers three bedrooms, plus an office and theater. The beautiful house overlooked a field behind it which was lovely, but the real gem was the hidden pantry.

If you are going to

What: GRO Parade of Houses

When: 10am-7pm until September 22 (closed on Mondays and Tuesdays.)

Tickets: $15 general admission; must be purchased in advance at aftontickets.com/groparadeofhomes

“A lot of people are taken aback by it,” said Niall Glavin, owner of Glavin Homes.

Finally came the Oak View home. At 3,058 square feet, this Glavin Homes home features three bedrooms and an office. As I entered the house with its seemingly sky-high ceilings, I couldn’t help but notice the giant oak tree through the living room windows as its leaves danced in the wind.

Glavin likes the open floor plan but says the view is the real draw of the home.

The new owner can “do the dishes and watch the leaves in the breeze,” he said.

If you are on the market, four of the six houses are for sale. The event isn’t just seen as an opportunity for builders to sell high-end homes. It is also a showcase of the latest and greatest trends.

“It allows builders, architects and interior designers to express what they love and what interests them,” Glavin said.

Additionally, this year’s event will drive more traffic to Ridgefield.

“There are a lot of local businesses, which is really good,” said Kayla Hidalgo, realtor at Cano Real Estate. It’s “just getting people through the door”.