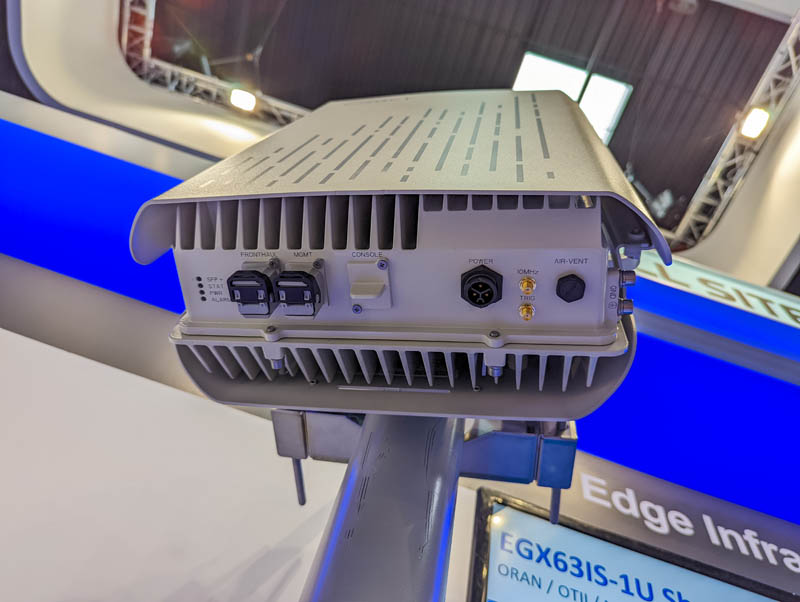 QCT at MWC 2022 and a glimpse of great server design

At MWC 2022 (or Mobile World Congress) last week in Barcelona, ​​Spain, I had the opportunity to stop by the QCT booth to see what the folks at Quanta have brought. I only had a few minutes, but since QCT servers are one of the only server brands that we don’t regularly review on STH, I thought our readers would like to at least get a glimpse of what the company. There are certainly some great design elements in the company’s current generation. I picked out a few photos and wanted to share them.

To note: These all used show floor lighting and a phone camera, not our normal studio setup.

At the show, we saw the QuantaGrid D53XQ-2U and D53X-1U QCTs on an already open table. Like many servers we review these days, the big differences come down to the 2U form factor having more room for larger PCIe risers, storage, and fans. We recently looked at the impact of 1U vs. 2U fans in our in-depth analysis of reducing server power consumption.

Since the 1U was slightly better lit, we use it. The first two things to point out are that QCT has a proprietary mezzanine storage riser so it can add SAS RAID controllers without using up valuable PCIe slot. We can also see the OCP NIC 3.0 slot on the back. The living room server had two full height risers, but there are other options like a low profile three riser design.

It may seem like a small feature because it is, but QCT has two M.2 2230 drive slots that extend vertically from the motherboard. This is designed for dual-boot M.2 drives. Most of the M.2 solutions we see are on a board or parallel to the motherboard, it’s a different solution which is really nice.

Another very different feature is on the back of the motherboard. First, there is a very small white header in this photo under the CR2032 battery. We also saw an Altera FPGA on board and asked if the onboard FPGA is for Intel PFR. Quanta told us that the onboard FPGA is for functions like blinking lights, but the small header is designed for a pluggable PFR FPGA. Many customers don’t want PFR (although Intel will push it more in the future) and so having a pluggable module reduces the BOM cost for those who don’t want to use the feature.

The other big one here is the module you can see to the right of this photo. QCT has the BMC on a map. This allows the same overall server design to do something quite different. QCT has multiple BMC vendors and designs it can support by placing the BMC on a board. The vast majority of servers we see have the BMC on the motherboard, so it’s a very different design.

Since it was the Mobile World Congress, QCT also brought some of its mobile solutions. Here is an Intel Xeon D-2100 series outdoor enclosure designed for pole mounting.

I asked to look inside and received puzzled looks. The case is tightly bonded to the components to provide passive cooling. These heatsinks are large and the overall system is >30L. As QCT was showing the Intel Xeon D-2100 series system (we already covered a Quanta Xeon D system years ago), I asked if there was a “theoretical” Ice Lake-D system, s would be the same size. I was told that “theoretically” a system would be about 25% smaller based on Ice Lake-D if such a system were ever created.

QCT had a number of other pole-mounted solutions. Here is another unit with an angle that is not often shown.

Besides the poles, the company also had a rack designed for ORAN/vRAN applications. The illustration below shows the switching and compute infrastructure. Beyond these, the rest of the rack has been designed for power distribution and battery backup.

We sometimes look at 2U/1U front I/O platforms for this segment, which gives you an idea of ​​how these systems are stacked. QCT’s goal is to provide rack solutions for 5G deployments.

QCT is a very large server provider, but mainly markets to very large scale customers. Although they make a lot of systems it’s often hard to see QCT products so I thought I’d take a few minutes and just check in and see what they had, although nowhere near the level of when I first visited QCT in Taiwan. I hope travel will resume as the pandemic subsides, but I’m doing two international trips in two weeks to start getting out and showing more to STH readers. Seeing practical equipment, even if briefly like this, is great because we can see what companies are doing with their product lines.