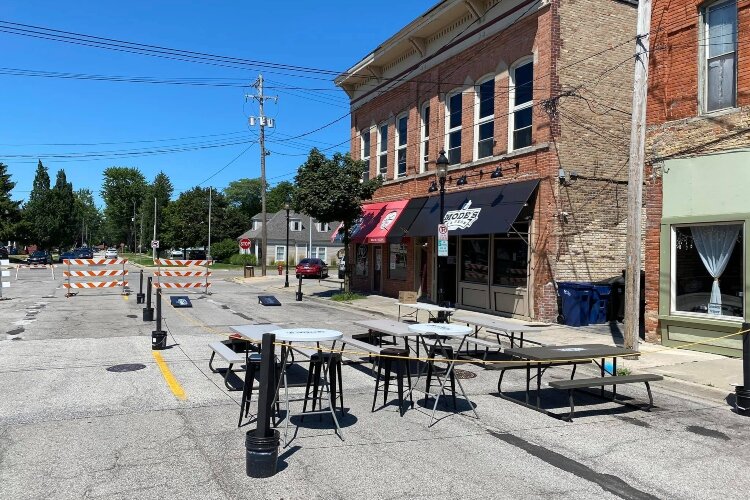 New and seasoned entrepreneurs aim to transform the neighborhood

A group of committed and avant-garde entrepreneurs takes Midland Street Business District by the storm, and they will not be discouraged by naysayers or pessimists.

Whether they own established businesses or have recently purchased vacant buildings, these business owners have taken it upon themselves to reinvent Midland Street.

A transformation as big as this takes a lot of work. Fortunately, the key players are not hesitating to make the necessary efforts.

Matt Nemode, Chairman of the Board of Midland Street and owner of Fashion Tavern108 N. Linn St., is optimistic about the direction the district is headed. 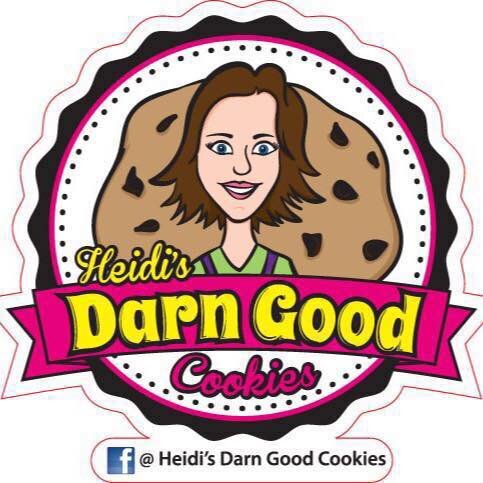 major skate, the indoor skate park that occupies a suite at 106 S. Linn St., is owned by Anthony Malenfant and is set to open on or around August 16 after months of renovating and setting up the park. The building was vacant.

LoLoBee’s living roomlocated in the same building, opened in mid-July and serves tea and coffee as well as providing a place to relax.

Greg Kimbrue, a legendary Bay City restaurateur and wine lover, says these kinds of new businesses are just what the street needs to breathe new life into the area.

“In this sector, we need vital businesses, not vacant buildings. The things that helped downtown Bay City become what it is now are what will work here. The big thing here is reinvestment and operators.

In fact, Kimbrue is a central part of the change himself. Recently, Kimbrue sold Rock River Cafe614 E. Midland St., a location he has co-owned with longtime business partner Willis Wells since 1999. Additionally, he and his wife, Peggy, are in the process of selling VNO Wine Warehouse & New Age Restaurant512 E.Midland St.

Kimbrue says of the two close sales, “The time to sell is when you have a buyer.” Although he wasn’t desperate to sell, when opportunities presented themselves, the 64-year-old took advantage of them. 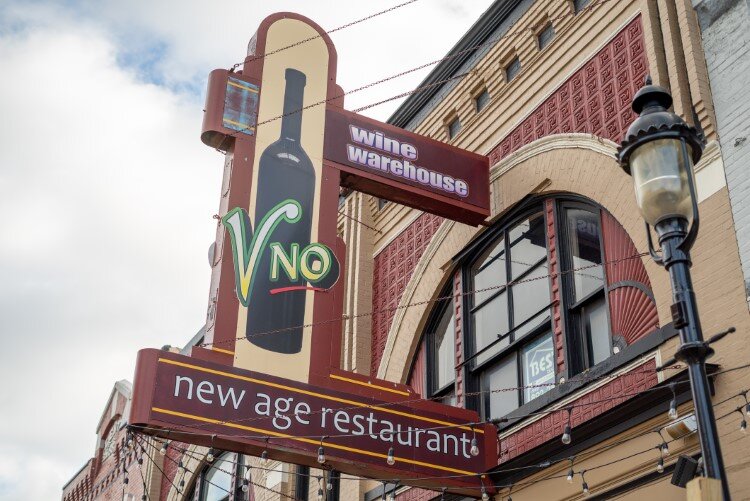 Kimbrue has reduced the prices of its huge collection of wines at the VNO Wine Warehouse. (Photo courtesy of VNO) River Rock Cafe was purchased by a former Kimbrue employee, Erik Thompson, along with Thompson’s stepfather. Although Thompson has taken possession of the building, Kimbrue says he will not be able to open until the contingent or temporary license clears all state hurdles, which could be by the end of August.

While there are still loose ends to be ironed out, Kimbrue believes the kitchen will feature unique and on-trend dishes, such as ramen bowls, saki, fresh fruit cocktails and tandoori chicken. 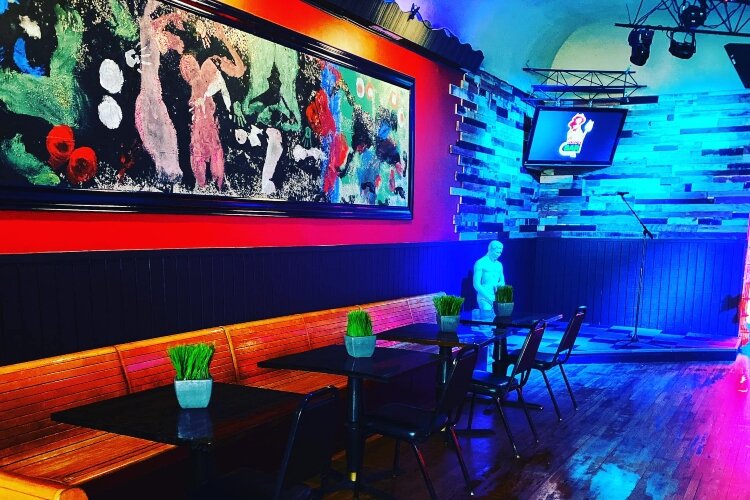 Kriss LaRock, who renovated Duso’s Bar from a pirate theme to a karaoke hotspot with gothic elements, buys VNO. (Photo courtesy of Duso’s Bar)The potential VNO buyer is certainly no stranger to Midland Street. Kriss LaRock, owner of Duso’s Bar604 E. Midland St., is set to purchase the restaurant, though the process has been extremely slow, a problem that Kimbrue says is due, in large part, to staffing at the restaurant. State.

“Everything moves as slowly as snails. There were problems with the paperwork initially. More recently, there has been a problem with legal things. Potentially it could be final in 15 days,” Kimbrue says.

Although LaRock has posted elements of his plan on social media, the new restaurant remains a bit of a mystery.

Kimbrue says, “He (LaRock) plans to do a lot of things in a more upscale way. He’s traveled a lot and has lots of new ideas from things he’s seen all over the country. High-end liquors, cocktails and things like that… things that give jaw-dropping appeal right in front of the customer.

In the meantime, Kimbrue continues to manage VNO and liquidate its massive wine inventory.

“Anyone who knows me knows that I will work until the last minute. Until the keys come out of my pocket. 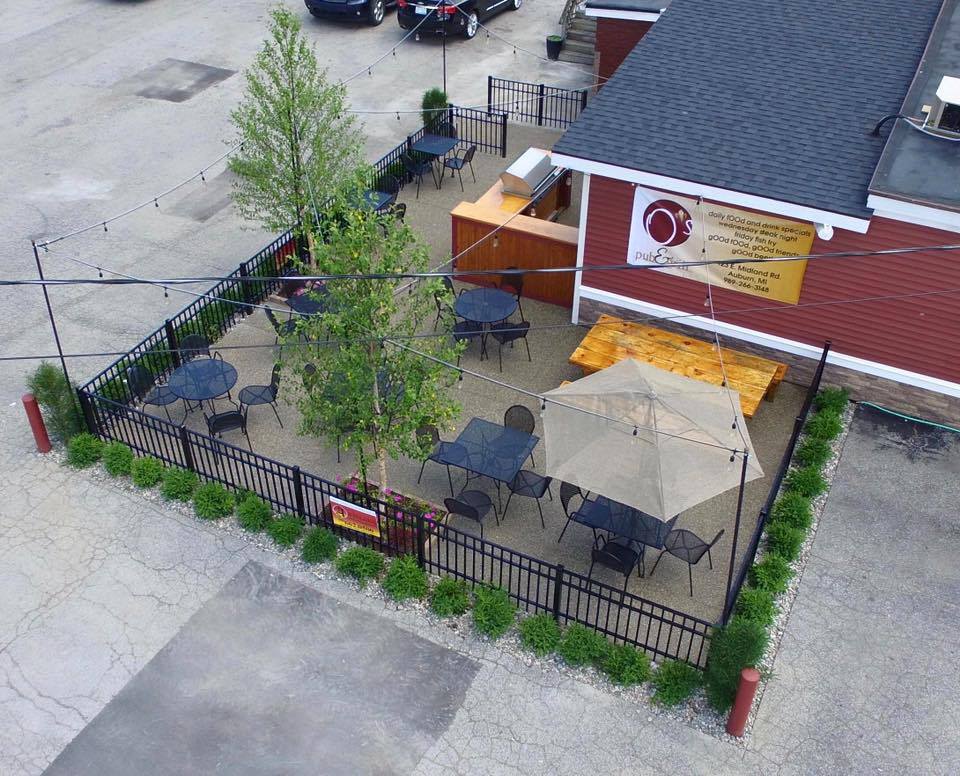 Marc and Laura Owczarzak, owners of O’s Pub and Grill in Auburn, 123 E. Midland St., purchased the property that once housed Hooters at 966 E. Midland St. in June 2022 to expand.

Marc says: “At O’s we have reached a point where we either have to expand the current location or look for a second location. Since the building in Auburn is older and has a lot of character, we didn’t want to spoil what we had to do there. So what was best for us was to expand into a new location.

The Owczarzaks’ vision for the new facility includes a complete renovation of the building, which has been vacant for several years.

And the changes don’t stop inside; the exterior will also receive a facelift, including the boat docks.

Although Marc thinks the restaurant will open in October or November 2022 in time for the holidays, the docks are another story. This lengthy project will require approval from the Army Corps of Engineers. Optimistically, the docks will be available for customers on the river in time for the 2023 summer season.

For those who love the cuisine of O’s in Auburn, the new restaurant will feature many of the established favorites, plus more options and a slightly different concept.

“We are excited to bring our product to this area, to Bay City. Being one of the neighborhood bookends is very exciting for us. Having grown up in the area and spent a lot of time growing up in this neighborhood, I’m so excited to be a part of its rebirth. There’s a long way to go, but we’re on the right track to get there and I’m excited to be working with everyone. 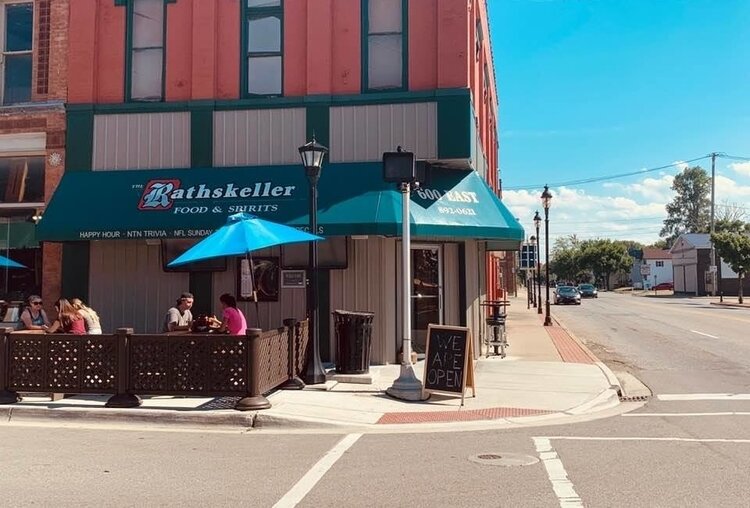 Earl Bovia, owner of Bay City Bill’s in South Bay City, is thrilled to now own the Rathskeller, which is a longtime Midland Street establishment. (Photo courtesy of The Rathskeller)“The Rat” changes hands

Bovia says the couple were thrilled to have the chance to join the business district. “I think Midland Street is a place of destination for many people. So when we had the opportunity to buy an iconic bar like The Rathskeller, Jason and I jumped at the chance.

Although many think Midland Street is synonymous with bars, Bovia is committed to showcasing all the street has to offer.

“There are all sorts of new investments going on and new blood with new owners of long-established businesses. Often the region receives a bad reputation which is not deserved. We invite people to come down and rediscover Midland Street. 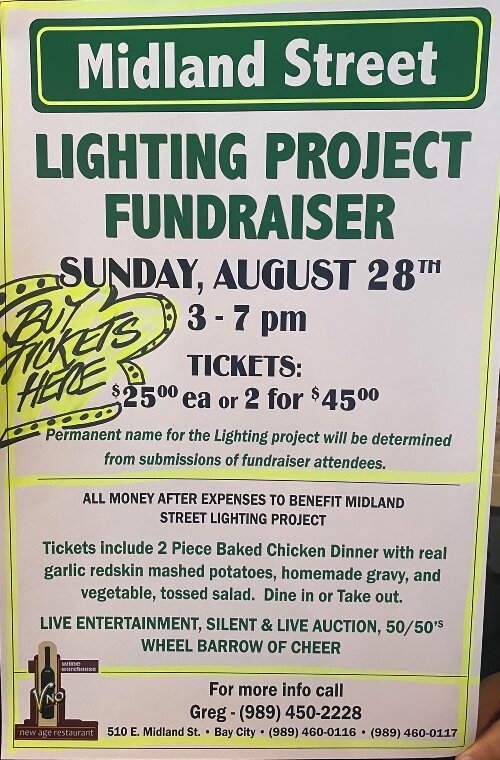 A fundraising event on Sunday August 28 aims to raise funds for a special lighting project in the business district. (Photo courtesy of VNO)Despite the frustrating times of recent years, Nemode is convinced that the future is bright for Midland Street.

To help ensure this, a fundraiser for the lighting project will take place on August 28 at VNO to raise funds for a series of lighted arches that will span the street, starting with the 500 block. Fundraiser tickets are $25 each or two for $45. The 3-7 p.m. event includes live entertainment, silent and live auctions, and raffles. Ticket price includes a baked chicken dinner. Tickets are available at Mode’s and VNO.

“The Management Board is in the process of planning major district wide events to benefit all businesses and will be very family friendly. Every day the district feels a little more inviting, which will only lead to great results. »