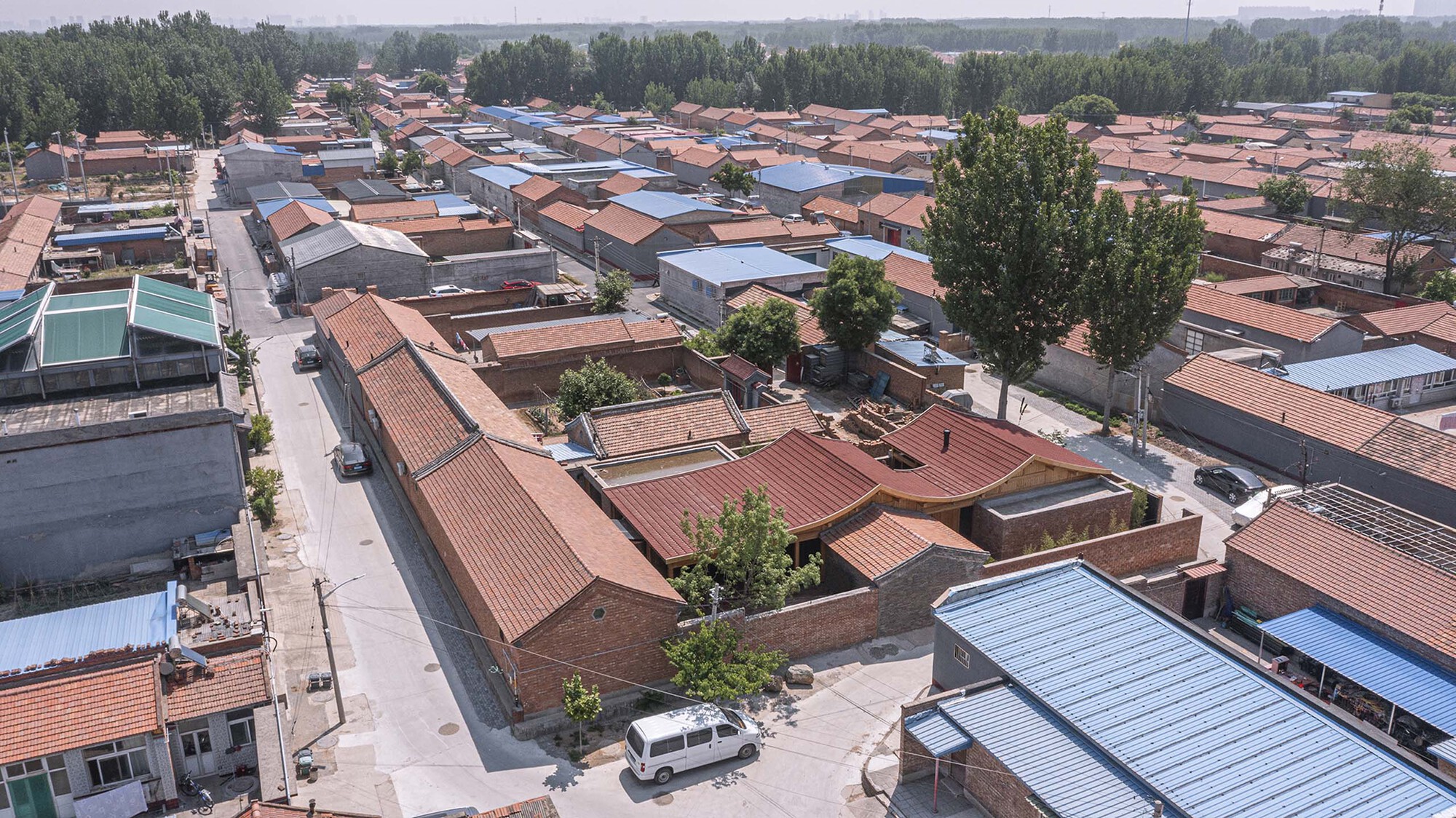 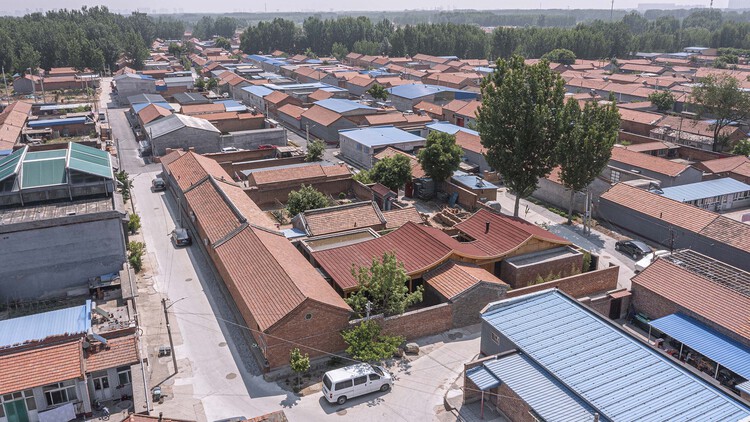 Court house and village. The project is located in an ordinary village on the outskirts of Beijing, a typical northern plain Chinese village mainly consisting of one- and two-story houses with courtyards. Most of the houses in the village face south and feature red bricks and tiles. In addition, there are also various additional constructions built independently by local villagers to meet their changing living needs, such as huts with colored steel roofs or glass roofs, which blend with the natural fabrics of the village. The project is the transformation of a house with courtyard in the village. The client, who currently lives downtown, wanted to create a family vacation home and a place to meet friends. By approaching this project, ARCHSTUDIO wished to present an architectural status mixing the old and the new and to build a connection between the project and the built landscape of the village. The aim was to let the renovated architecture blend into the village with a discreet gesture, while creating a small, rich and natural world inside the courtyard house.

Old house and new construction in wood – Mixture of architectural forms. The original architecture is a courtyard consisting of two courtyards, two sloping tile-roofed buildings and several flat-roofed volumes. After investigating the site, the design team decided to retain and properly transform the north building, which was frequently used and was in good structural condition; renovate and preserve the south building, which had ancient structures of historical value; and to dismantle other auxiliary volumes built for temporary use.

The new addition is a corrugated wooden construction, which replaces the old rooms in the middle of the site and extends to the north and south sides to create spaces for daily living, thus shaping a new model for the courtyard enclosure. . The new wooden volume undulates in the extension of the old roofs, and forms two continuous ridges, under which are important public living spaces including the living room, the dining room and the kitchen. In addition, two flat-roofed building blocks are extended under the roof of the wooden construction, housing ancillary functions including two bedrooms, a garage and a bathroom. For the old building on the north side, the design team exposed its frames and fitted two bedrooms and a living room into its interior space. The insertion of the new wooden construction reinforces the undulating stratification of the roofs and creates a dialogue between the volumes of the old and the new building.

Yard and interior – Mix of behaviors. The original spatial model comprising a front yard and a back yard is rearranged to form six courtyards with different scales, landscapes and functions. The front yard is located in the southwest center of the site. Opening the metal gate, a bamboo path leads the occupants to the entrance of the building. Pushing open the door and entering the foyer, a courtyard with a maple tree appears. The maple displays the colors of nature throughout the seasons and becomes an enhanced view between the living room and the dining room. The space reserved between the living room and the southern perimeter wall forms a side courtyard, where trees and stones are planted. On sunny days, the folding doors in the living room can be fully opened, extending the courtyard inside.

Continuing north, occupants will reach the renovated old building. Here, the kitchen and the dining room unfold horizontally, the old and the new framework dialogue with each other. Between the dining room and the walls of a neighbor’s house is a bamboo courtyard, which offers an experience of eating and drinking in a bamboo grove. After crossing the dining room, the backyard is reached. This courtyard is mainly intended for outdoor activities and is connected to a semi-outdoor veranda. Planted with a large tree, it offers a pleasant place to relax and chat.

The space at the back is the bedroom. The north building and the wooden construction are connected by a glazed corridor, which naturally forms a narrow courtyard. All three bedrooms offer direct views of the exterior landscape, meet natural lighting and ventilation needs, while avoiding obstructed sight lines. The organization of different courtyards brings a natural vitality to every corner of the interior space.

Structures and Materials – Mix old and new. The newly constructed wooden construction adopts cedar plywood as the main material and applies traditional raised beam frames, to echo the characteristics of traditional houses in northern China. By making full use of plywood, a low-carbon and renewable natural building material, the newly inserted wooden construction extends the wooden frame of the existing old house with new structural expressions, creating a dialogue between the old and the new. Additionally, the new corrugated roof is constructed with beams and columns featuring minimized cross-sections and maximized spans, to ensure reasonable structure and control costs. Doors and windows use fixed insulated glass and laminated bamboo panel sash frames. Solid openable window frames help improve ventilation and fixed panes provide a full view of the outside. Additionally, all indoor stationary furniture is customized with the use of laminated bamboo panels. Various timer materials, including plywood, laminated bamboo, and existing wooden beams, form a fusion of old and new.

The newly constructed perimeter walls are made entirely of locally recycled old red and gray bricks, which achieves the reuse of waste materials. While renovating the existing buildings, the design team decided to remove and polish the white ceramic tiles on the exterior of the preserved north building to expose its red brick walls. In demolishing parts of the South Building’s roof, the designers found that its original structures were badly damaged and the walls below were in danger of collapsing. Therefore, they dismantled the roof and replaced some old wooden components with new ones. During this time, the walls were rebuilt with old gray bricks incompatible with their original forms.

The floor is paved with new red bricks, more resistant to water and dust. The roofs are clad with metal tiles coated with red vermiculite, which are lightweight, economical and have a long life. The red surfaces of these metal tiles match the red tiles commonly seen in the village. By creating yards, updating structures and reusing materials, the design team attempted to invent a sustainable design strategy for the evolution from old to new. In addition, they have struck a balance in maintaining features, coordinating styles, and controlling costs to create new opportunities for the renewal of rural architecture.