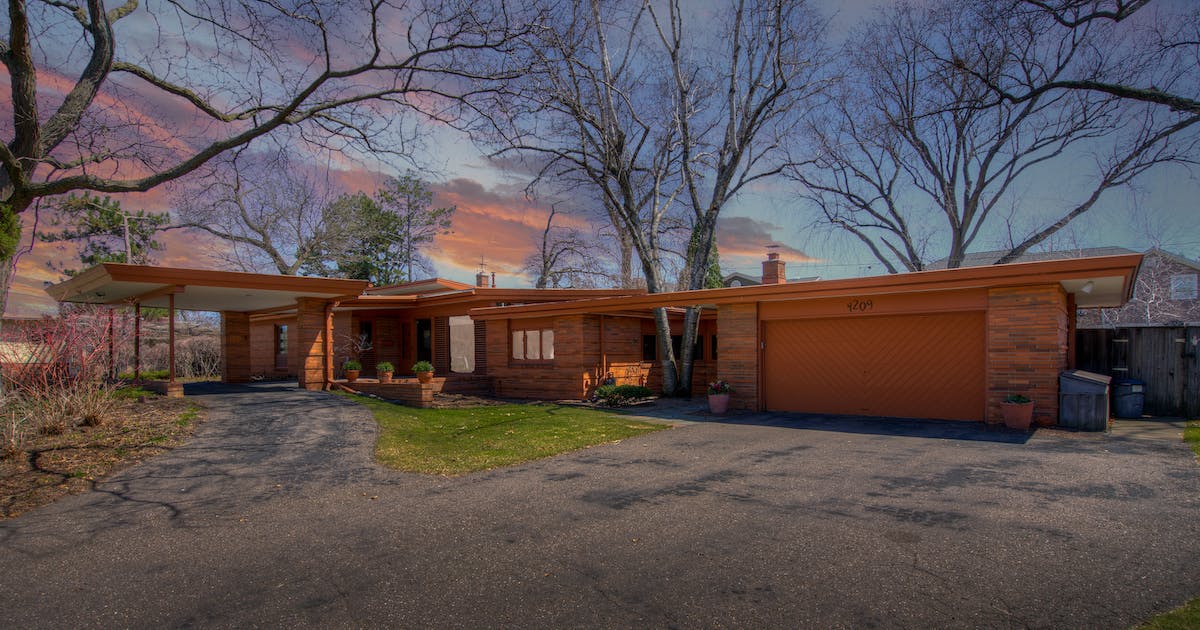 Judy Ingber has been an architecture enthusiast for as long as she can remember. She grew up in Minneapolis in a home designed by award-winning modernist architect Elizabeth “Lisl” Close.

So when she and her husband, Jerry, were house hunting and came across a mid-century modern home designed by Saul Smiley and influenced by Frank Lloyd Wright, they knew this was what they needed.

“It reminded me of Lisl’s house that she and my dad and mom had created. It was spacious without having a lot of rooms,” Ingber said.

Originally, the house in St. Louis Park near Cedar Lake was built in 1952 for Nanking restaurateurs Carl and Yetta Chalfen.

Twin Cities architecture critic Larry Millett said the house is one of several in the western suburbs designed by Smiley, whose firm also designed the legendary Thunderbird Motel in Bloomington.

“With its banded masonry and low profile, the Chalfen House is reminiscent of Frank Lloyd Wright’s Usonian houses of this period,” said Millett. “The courtyard is a distinctive element that mid-century architects, including Ralph Rapson, used very effectively in their designs.”

Millett called the Chalfen House “elegant in design with exceptionally fine detail throughout, and it is an outstanding example of mid-century architecture in the Twin Cities”.

Up close and personal

The Ingbers became the third owners when they purchased the place in 1982. They enjoyed the design of the Prairie School, which begins outdoors in a strong connection to nature with details such as a courtyard that wraps around a birch tree. The house comes with a porte-cochere overhang to transition between exterior and interior spaces.

“The house is an example of a lot of the prairie schoolhouse elements that Saul Smiley used,” Judy said. “It starts outside with natural elements [such as slate and brick] and continues to the interior.”

Once inside, a row of clerestory windows just below the ceiling let natural light flood into the asymmetrical rooms.

“When you look into the living room and dining room, it’s L-shaped. Like Wright, it’s not a room with 90-degree angles, and it’s a story and a half,” said Judy.

The house came with another mark of prairie style that the Ingbers were especially grateful for when they first moved in.

“When we bought it, we had absolutely no accommodations. But luckily, as is the case with prairie styles, there were built-in features – beds, closets, dressers and chests of drawers. other wonderful features – so we didn’t need furniture right away.”

Over the years, the Ingbers had the good fortune to learn the history of the house from the architect himself. They met Smiley twice, and he was more than happy to talk about unique details like creating a series of slatted doors in the living room.

“He told us that Mrs. Chalfen and her husband had seen a movie the night before where there were these revolving doors. After that, she saw exactly how she wanted this space to be divided,” Jerry said.

“Saul says he’s seen the movie 11 times. Since there were no reshoots, he was drawing like crazy every time the doors were shown in the movie. … The result was quite beautiful.”

The Ingbers undertook many projects, such as updating the brickwork and cork flooring. They gave the kitchen a major refresh while incorporating stone, granite and cherry wood.

“We wanted natural elements and brought it to the original blond wood when building it,” Jerry said. “The second owners had stained all the wood blond with a walnut.”

The previous owners had also installed a swimming pool in the backyard, which the Ingbers and their two sons have enjoyed over the years.

The Ingbers made their own upgrades to the outdoor living space, adding a second patio, hot tub, gazebo, redwood fence, wildflower garden, and olive tree.

Now that their kids are grown, the couple listed the one-level, three-bedroom, three-bathroom abode at 3,675 square feet.

As they downsize, they maintain their commitment to architecturally unique homes. “We’re moving into an older house that used to be a grain silo,” Jerry said.

The Ingbers hope future owners will enjoy living in such a unique home in a location that offers easy access to downtown Minneapolis, lakes and bike paths.

Listing agent Ed Bell said from the vaulted ceilings to the clerestory windows, the home is designed to bring the outdoors in pleasantly.

“The house captures the timeless characteristics of mid-century and prairie architectural design,” he said. “It’s a wonderful life on one level.”

Coffee bar ideas that will convince you your kitchen needs it