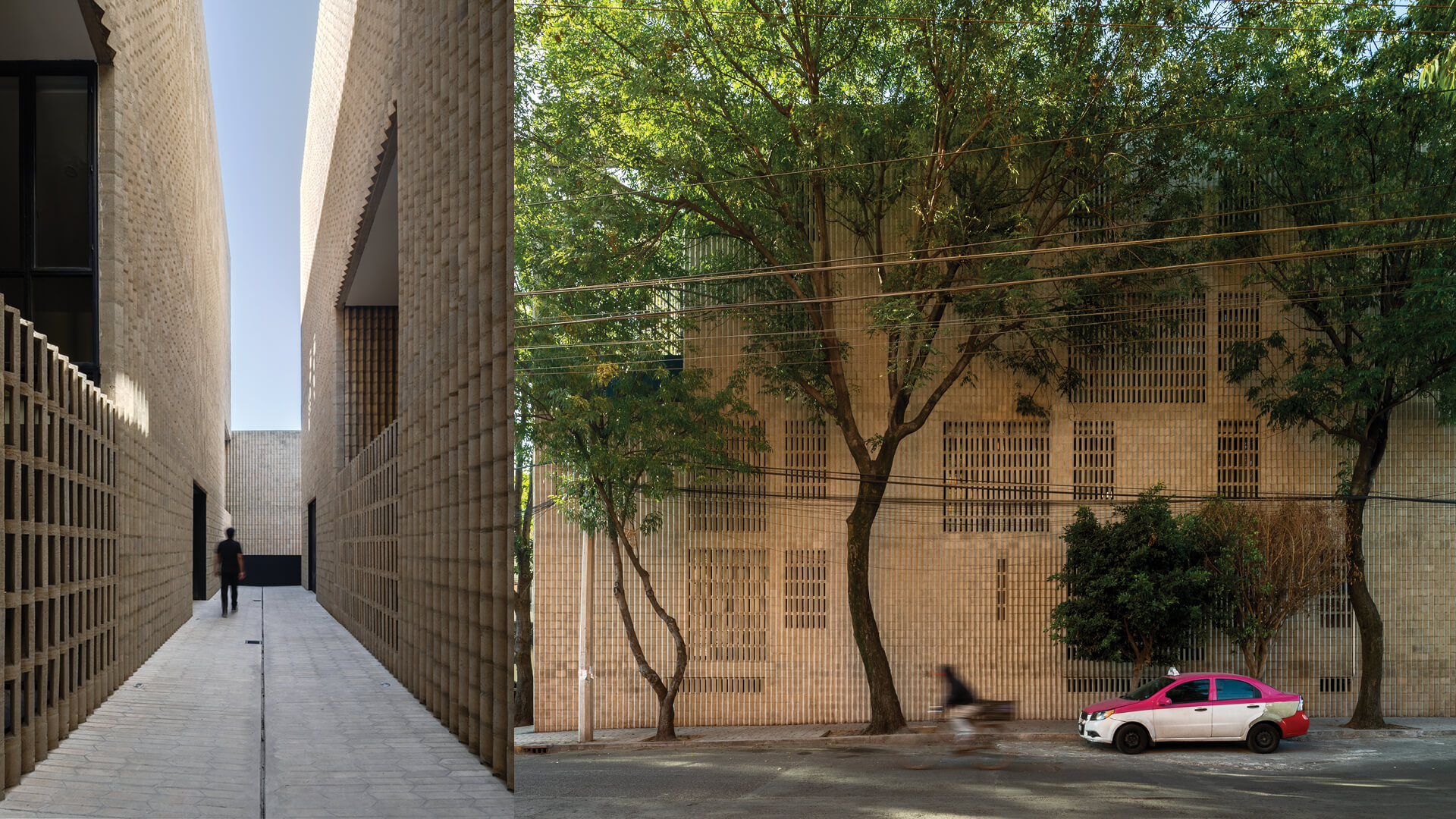 In Mexico City, streets are named after famous authors, professions, plants, geographical features, virtues and literary phrases. Mar Tirreno 86 is a residential block at the intersection of streets named after the Tyrrhenian Sea and the Black Sea. Commercial premises, a garage, a house with pedestrian access and a courtyard from different eras existed and were adapted locally on the same plot, all in a poor state of construction to be reused or preserved. The folded and windowless facades of the new housing block of Mar Tirreno 86 contrast with the neighboring buildings, which are flat and have large openings at intervals prohibiting their structure. The block snaps to all plot margins, and its bulk, at first glance, appears to be a simple extrusion of this limitation. Two footpaths surround the northern and northeast edges of this mass.


As we round the sharp bend, walking from Mar Negro to Mar Tirreno, the surface folds in on itself and we encounter a series of steps that lead to an elevated inner street. It is the main circulation backbone of the project designed by Mexican architecture firm Frida Escobedo Studio. From there, 10 duplex apartments are accessible on either side. The street design is inspired by 20th-century Mexican workers’ housing, making it easy for people to meet and find each other on the interior street.

The architects, in their statement, explain this typology: “We chose to divide the housing into two distinct volumes, a decision inspired by the ‘vecindad’, a type of workers’ housing common in Mexico dating from the beginning of the 20th century. , in which the family dwellings are arranged on one or both sides of an open-air and private patio in the form of a corridor.

Designed by the studio led by architect Frida Escobedo, it was completed in 2018, the same year the firm’s Serpentine Gallery Pavilion in London opened to the public. We can draw parallels between the layered spaces that unfold as you progress through both projects. The rhythms of the surfaces of the Serpentine Pavillion, which are made by weaving cement tiles, seem to mirror the patterns of the bespoke concrete block courtyards of Mar Tirreno 86. In both of these projects, through folding surfaces, numerous ladders and enclosures of varied quality are created. These surfaces, created by the stacking of repetitive modules, make it possible to order the degrees of vision and intimacy of these enclosures. First impressions of solidity dissipate as you move between these speakers.

Leaving the exterior surfaces unpainted, such as in Louis Kahn’s Indian Institute of Management in Ahmedabad, the concrete blocks mediate the scale of the four-story mass with humans to create a relatable experience.

In an attempt to “challenge the organizational limitations of the vertical housing block”, the architects imagined the apartments as “multi-storey patio houses”. The houses are internally composed so that each duplex unit has an interior courtyard or terrace, crossing its two levels. These semi-private terraces receive filtered light and diagonal views through slits in the concrete blocks that make up the exterior surface. This gives the project a sense of unity.

They explain: “Rather than relying on balconies to provide private outdoor space for residents, we instead chose to fold the units inwards to form a series of quiet, sheltered terraces that mediate between the interior and outside in a more ambiguous way.

From the inner street we can enter five apartments directly. On this level are the living room, the dining room and the laundry room. Interior stairs connect to the two or three bedrooms above in each unit. In addition, each of the other five apartments has its own staircase or a common staircase that rises from the street. All the spaces, masked by the mediating surface, are designed to be silent, even meditative living environments, removed from the hustle and bustle of the city. Light filters through and self-dyes, creating many ever-changing shadow and shadow features. The role of ornament is reinterpreted through this performance. Elegantly explained by Frida Escobedo Studio, “Light and shadow ripple as they move across the surface of this veil of concrete, producing dazzling effects throughout the day.” Folding, used as a design device at different scales, in Mar Tirreno 86 helps to merge its form, structure, material and ornament.