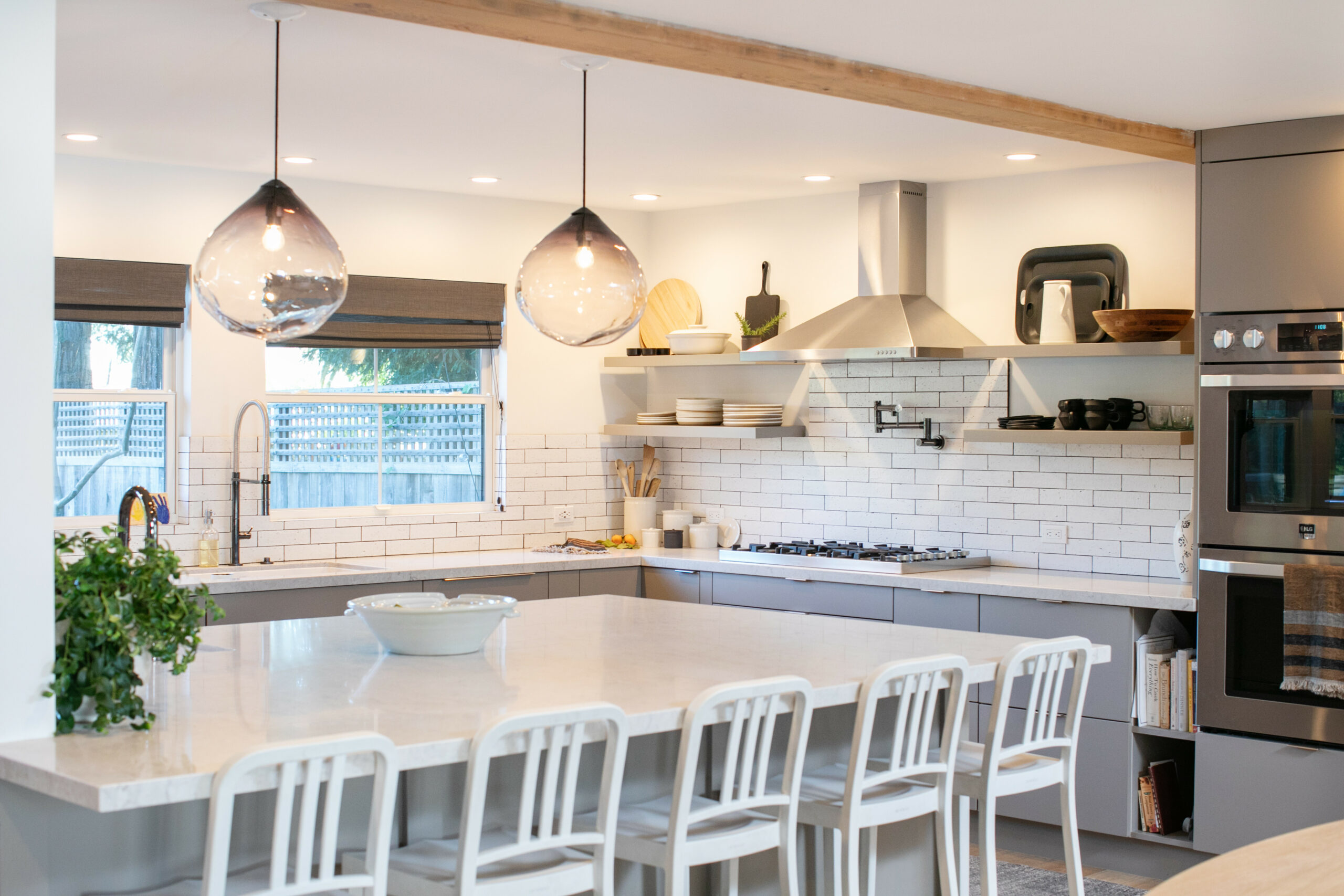 Four years ago, Jenne and Adam Wicht had a firm deadline to purchase their family home in Sonoma. “I was 40 weeks pregnant,” says Jenne.

“Like a trillion weeks pregnant,” laughs Adam. “And so we went over there and just started tearing up all the carpet, and called the painters and said, ‘Can you just whitewash this place?'”

Taking on ambitious projects under tight deadlines is normal for the couple, who own Jak W, a sustainable interior design store just off the plaza in downtown Sonoma, and manage interior design projects in business for tech companies like Google. At the time the couple purchased the home, they lived nearby in a 625 square foot cottage. The cottage was the first home they owned together and had huge sentimental value – but they knew it wouldn’t work with their eldest son and a new baby arriving any day.

After some initial cosmetic changes with paint and floors, Adam and Jenne lived with the boys in the house for two years, brainstorming renovation plans. In January 2020, they undertook another renovation which included a new interior layout, as well as updated floors and finishes throughout. “I have this design philosophy, that it’s not about putting the most expensive product in there and making it as polished and clean as possible,” says Jenne. “It’s about making the house work for those who live there. And now it just feels like our home. It works for us, and the way we want to live.

To achieve this goal, they designed a new kitchen open to the dining room and main living room and added a mudroom. Because they like to entertain, they focused on the flow between common areas and replaced a cramped, poorly functioning pantry with a shiny new black bar, where Jenne likes to mix up a martini at the end of the day. The ground floor also has a new playroom and homework area for the boys, Gus, 6, and Bernie, 4, where they can get creative and wreak havoc with their Legos and their board games, while staying nearby while Jenne and Adam work. .

The piece-by-piece process took a year and a half, evolving around the demands of living at home during a pandemic with two young children. “Because we were doing design projects for clients while we were doing this, there were a lot of things that had to happen on the fly. You always prioritize everyone else before making yourself,” laughs Jenne. “It’s like the cobbler who never has shoes.”

There were silver liners for their two sons, Adam said. “We had a backhoe in the garden for about three weeks,” he jokes. “Like, ‘Yes, we have construction equipment; we have a Bobcat in our backyard. “We just roll with it. We’re not the family that says, ‘Okay, it’s 6:30 p.m., time to get ready for the bath and bedtime,’” says Jenne. “We kind of break the rules… When Adam and I started our business, one of the things we talked about was if we have a family, we want our family to be with us. We don’t want to be separated from them. 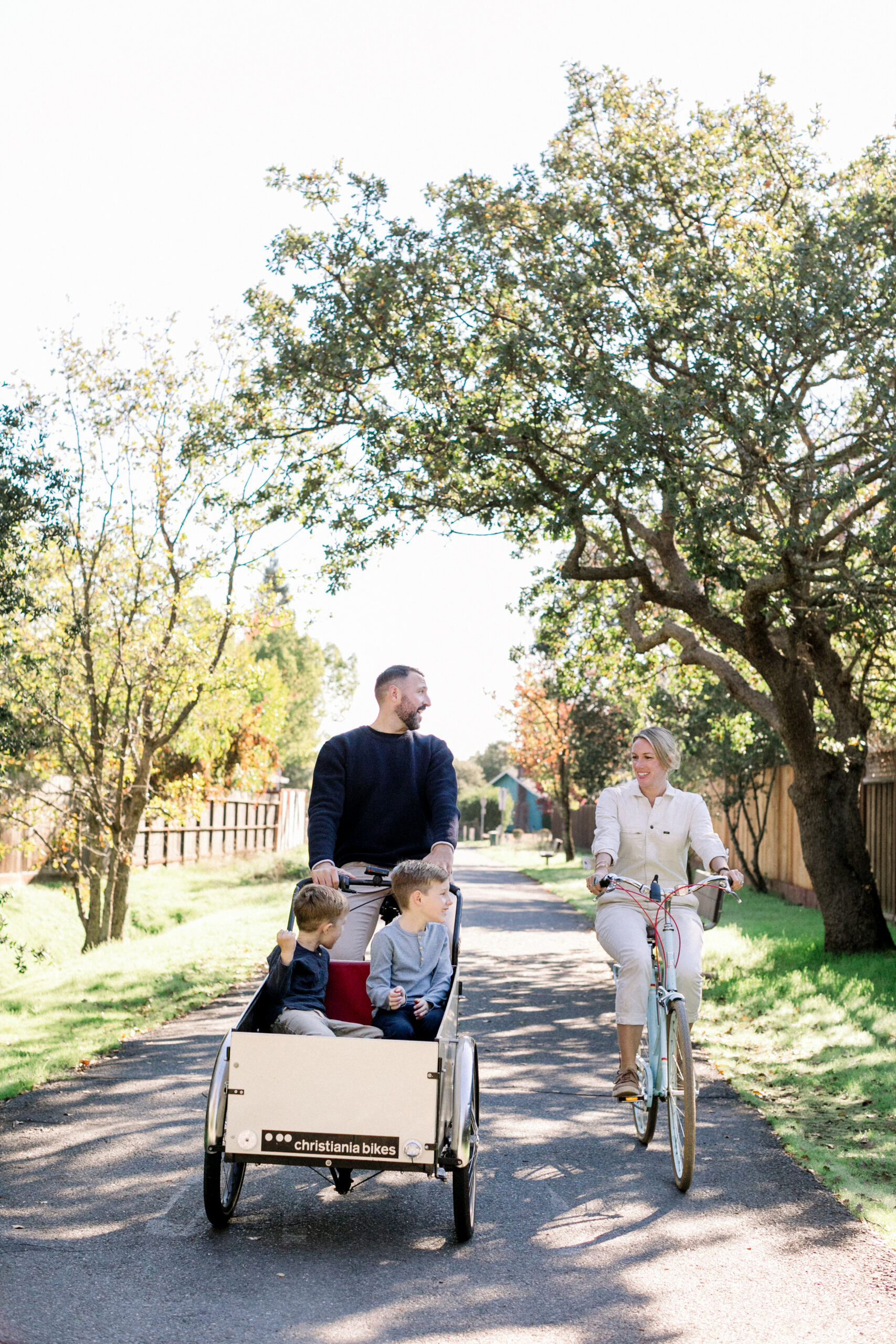 Even in winter, the Wichts can spend a lot of time outdoors together. There are lemon and citrus trees in the yard, puddles in the neighborhood, and small streams the boys like to play in at the nearby Montini Open Space Preserve. The house is also a few blocks from the paved bike path that leads to downtown Sonoma. On the weekends, the family rides into town to visit the store in a Dutch-style cargo bike with a large tub in the front where the boys can sit.

“I think one of the best parts of opening the store was getting to know the community better because now we’re rooted here in a way that we weren’t before. end and we see people coming into the store; we’ve gotten to know the other merchants around us. It feels like we’re really on board now,” says Jenne.

Adam and Jenne have family nearby, so the house has become a real family home, says Jenne. “The kids have sleepovers with their grandma, and Adam’s sisters are there all the time. It’s become like a revolving door, with the family coming in and out, and it’s really nice.

Courting the creatives. Interior designers Jenne and Adam Wicht say being part of Sonoma’s maker community was a big draw when they moved to town in 2013. Adam has his own aromatherapy skincare line called Boditonic, which is available in their store. “It’s inspiring to be around people who are creating things,” says Jenne. Some of his favorite local makers:

Pottery by Nicole. Sonoma ceramicist Nicole Hummer has created a line of mugs and dinnerware for the store with a soft, organic hand feel and custom ivory glaze.

Kin the label. Sisters Ashley Cornil and Sara Brady live in Sonoma and have a line of beautifully simple wool and straw hats perfect for being outdoors all year round. kinlabel.com

A classic Parisian apartment with a modern design