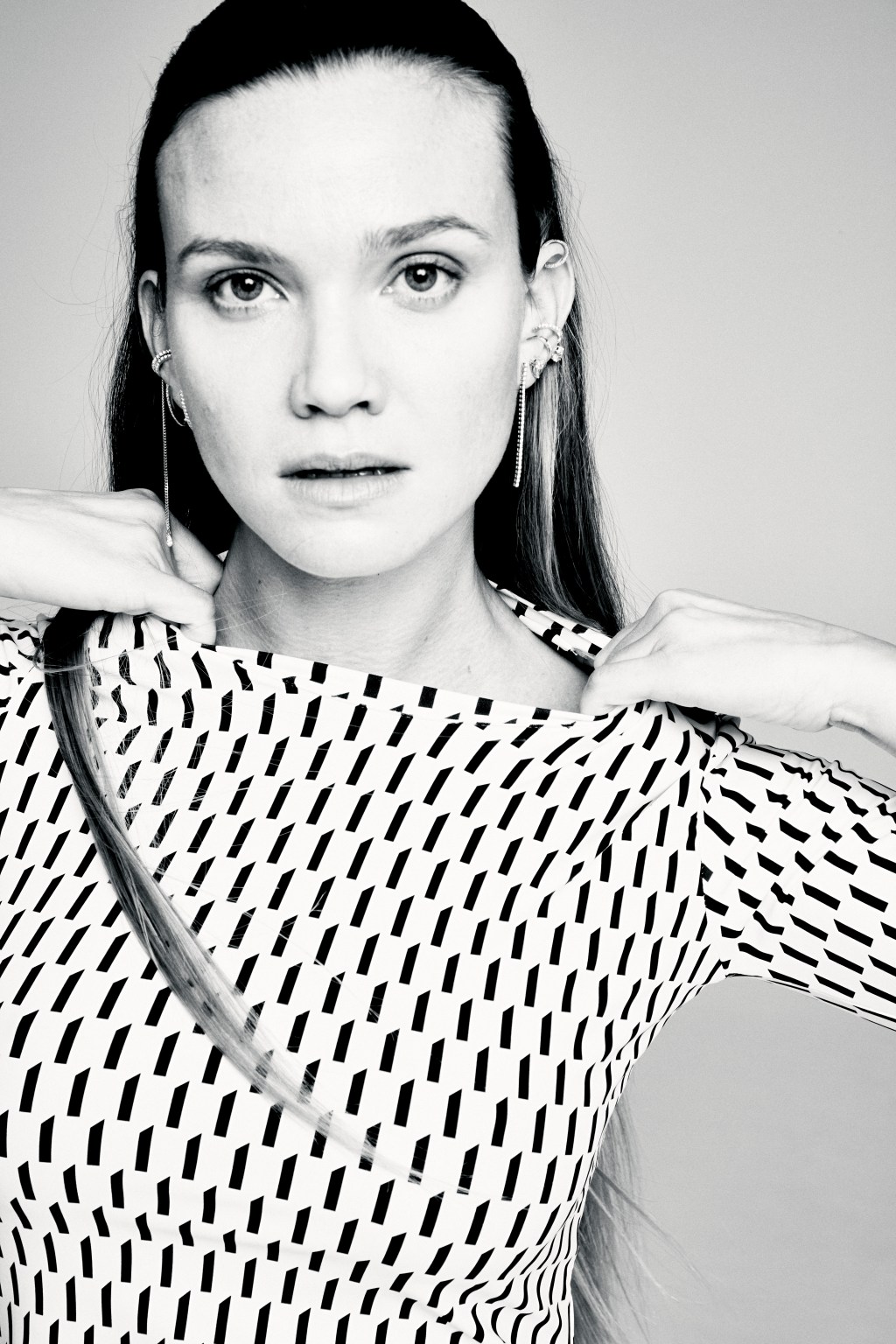 MILAN — The moment suspended just before making a choice is much more important than the decision taken, according to Italian actress and entrepreneur Fiammetta Cicogna.

“That’s when your inner strength is revealed,” she said of the moment, which inspired the name and philosophy of the jewelry brand she launched last summer and dubbed ” Inbilico” or “in the balance” in English.

As a consumer, these seconds or minutes could refer to the moments before choosing between different designs or those before choosing a sustainable option. Cicogna has integrated these two concepts into the brand, which aims to make jewelry more accessible, functional as well as socially and ecologically respectful by offering contemporary pieces made from recycled or certified sustainable gold and lab-grown diamonds.

Tapping into the growing appetite for lab-grown diamonds – but also joining the debate between these and mined stones – Inbilico was founded almost by accident, even though its seeds were planted a long time ago.

“I never imagined getting into jewelry. But for many years, when I was younger, I went back and forth between Italy and Kenya, and since then I’ve had this concern for mining, which I’ve always considered as false,” recalls Cicogna.

While these concerns have been spreading for decades, nearly four years ago, her friend Manuela Picciotto, co-founder and designer of Inbilico, accidentally landed on a page sponsoring lab-grown diamonds, sparking her interest in them.

“We fell in love with the technology behind it and decided to purchase one of these diamonds, asking an expert from Valenza [a key Italian goldsmith district] to make a jewel out of it,” Cicogna recalls, adding that they met strong resistance when the goldsmith learned that it was an artificial stone. A second attempt to bluff the gem’s origin showed them that even experts couldn’t notice the difference between man-made diamonds and mined diamonds.

“That’s when we decided to start this business,” Cicogna said.

“Consumption already goes against the concept of sustainability, but the truth is that we consume and cannot do otherwise, but we can try to do better,” continued Cicogna, highlighting the benefits of lab-grown diamonds in terms of protection of the environment and biodiversity, fair treatment of workers and conflict-free procurement, among others.

Yet, as man-made diamonds seep into the mainstream, many industry players still fail to recognize them as valid alternatives to mined diamonds, labeling them as fake or man-made even though they share the same composition – pure, crystallized carbon – and are graded by the same 4C examination of cut, color, carat and clarity.

The difference between the categories lies in the conditions necessary for the stones to form, with heat and pressure applied naturally or simulated in the laboratory. In the case of Inbilico, diamonds are born from small seeds, which are diamond chips, which undergo high temperatures, remain in incubation for about four weeks, consuming only one glass of water per carat and the equivalent three days of electricity for domestic needs. utilize.

On the other hand, the decline of the diamond mining industry questions the amount of energy used in laboratories and argues that the natural process provides more jobs along the supply chain and that improvements are made to support local mining communities, strive to become carbon neutral and execute large-scale conservation projects. Moreover, the pro-diamond mining sector continues to emphasize that only their stones have real value.

“I believe so much in humans and there is this technological humanism that allows us to replicate what exists on earth using our skills and technology. So there is a different way of doing things,” she continued. “I’m not going against fine jewelry companies that use mined diamonds, but as a new brand, I can’t pretend not to know about these new methods. It would be like launching a brand of real furs now.

The co-founder said sourcing lab-grown diamonds hasn’t been easy, as “there are only 25 labs in the world.” While at first Cicogna and Picciotti purchased single stones from different countries, once the duo took the brand seriously, they sought out certified diamonds to ensure their durability.

“We thought about working with Diamond Foundry, but shipping from the US was too large to offset in terms of carbon footprint,” Cicogna said. Thus, the brand has approached closer suppliers, in collaboration with the company Fenix ​​​​Diamonds in Belgium.

“My dream is to bring the technology here and grow my own Made in Italy diamonds, but right now it’s too expensive,” said Cicogna, who also wants to one day establish labs in Africa to enable communities locals to work under better conditions and be involved in the creative side of this industry.

With lab-grown diamonds costing an average of 30% less than mined, Inbilico aims to entice consumers with more affordable prices, offering valuable but not intimidating jewelry overall. While mined diamonds are often associated with large donation occasions, the lower prices of lab alternatives open up an opportunity for more frequent donations or personal donations for everyday use, they say.

With prices ranging from 390 euros to 2,100 euros, Inbilico creations meet this objective. Cicogna and Picciotti focused on multifunctional and transformable pieces, which could be combined with each other or with jewelry that customers already own, with the aim of breaking down the boundaries between eras and brands, as well as allowing customization and improve self-expression through accessories.

“Sustainability is also about reusing,” said Cicogna, who recalled how the brand’s concept was inspired by combinable jewelry she found at a market in New York and used to personalize a Tiffany piece. & Co. she had.

Cicogna described Inbilico as “jewelry for those who don’t like to wear jewelry”, alluding to its essential asymmetrical designs. These mainly focus on simple earrings and earrings playing with linear and elliptical shapes and micro pavé effects. “The idea is to have like rays of light that can catch someone’s eye. I love that these pieces can bring someone closer to you and spark a conversation: they are an icebreaker,” Cicogna said.

The brand will soon offer choker necklaces in gold or combining organic materials, which will add to the “bio-punk” aesthetic of the label, as defined by Cicogna.

While product design has gone smoothly and is already opening the door to experimenting with larger carats and bespoke projects – including statement pieces developed for rappers, which are “a dream come true” for Cicogna – the packaging “was the biggest headache”. said the co-founder, pointing to the high prices demanded by Italian companies for sustainable options. The result of a partnership with a Norwegian supplier, Inbilico’s packaging is recycled and includes bags derived from plastic bottles, water-soluble glue and ink derived from soy.

So far, the markets most receptive to Inbilico’s offer in Europe are Spain and the Scandinavian countries, with numerous contacts with local buyers stimulated at VicenzaOro last month. The UK is also a potentially key market according to Cicogna, but she said it was proving more difficult than expected.

While there have been discussions with Selfridges and Liberty, LuisaViaRoma has already added Inbilico to its LVRSustainable section. The distribution partnership includes a diamond ear cuff developed exclusively for LuisaViaRoma and an exclusive six-month global distribution with the online retailer, in addition to the brand’s online store.

Working on the awareness of synthetic diamonds and fighting resistance from traditional retailers are the biggest challenges for Cicogna. She compared the resistance she encountered to another business venture she is involved in with her husband, which launched the Heavensake brand focused on the traditional Japanese drink.

“We had the same problem, there are countries with more ingrained preconceptions. We started distributing it from Europe, but then stopped and focused on the United States, which is a more open-minded market in that sense,” Cicogna said.

Likewise, Inbilico will soon be turning its sights to the United States as well, heading to Las Vegas for the Couture jewelry show in June. Cicogna emphasized how strategic exhibiting at the event will be, as awareness of lab-grown diamonds is significantly higher in the United States.

“In Italy, we are slowly catching up, but there is so much need to educate consumers about culture and clear communication,” said Cicogna, who plans to do his part by developing informative video content with the help from the production company she owns.