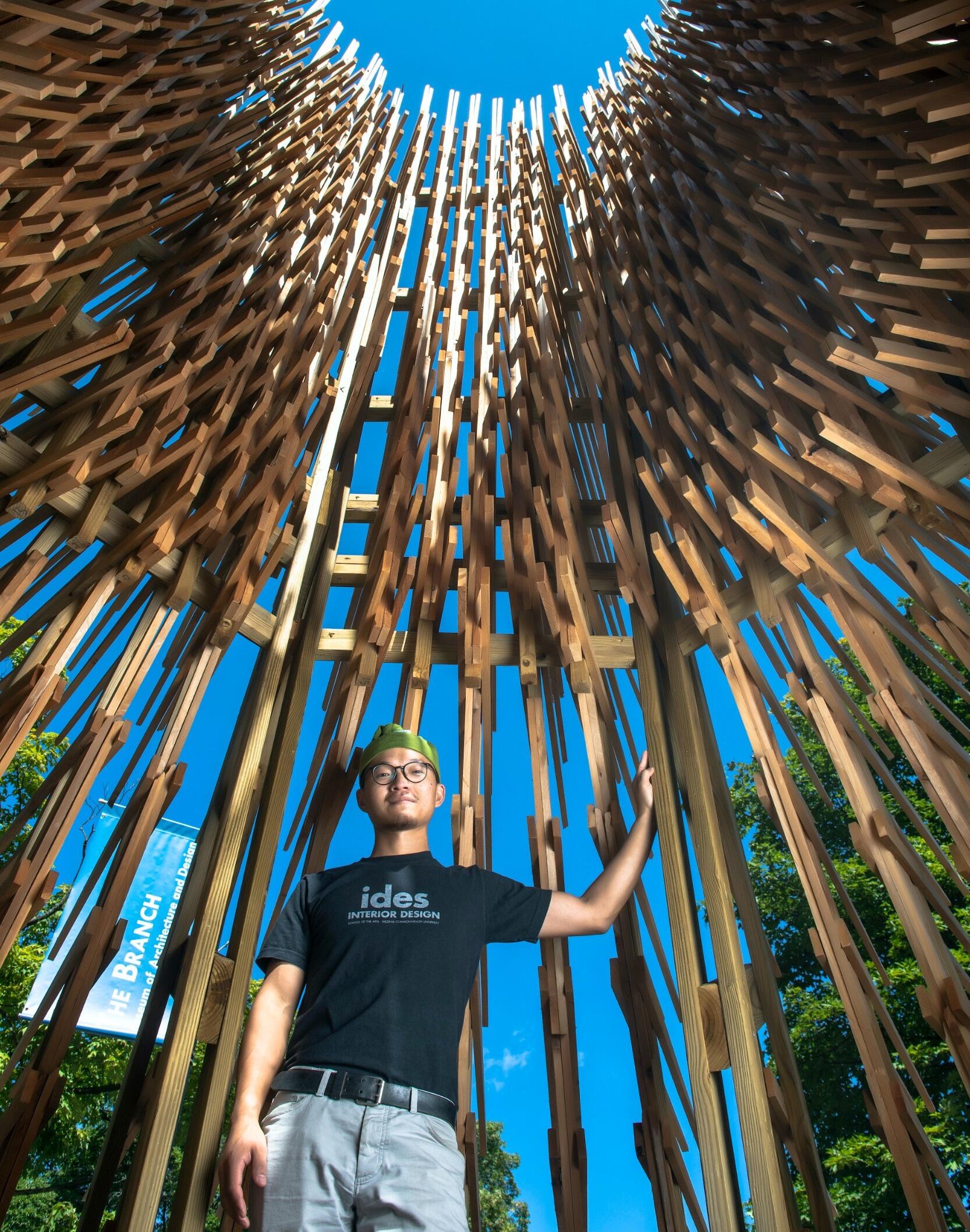 In ‘Helper’, An Liu invites us to reflect on our relationship with nature – and with each other – VCU News

â€œHelper,â€ a cedar architectural installation in the front yard of the Branch Museum of Architecture at 2501 Monument Avenue, is 24 feet high and spans 24 feet in diameter. The sharp sculptural composition resembles an angry porcupine or an upside down megaphone. At the base, hyacinth bean lianas grow purple flowers and shimmering pods, extending their runners from planters, and the eerie spikes divide into two places large enough to cross, allowing people to enter the structure and walk out. be surrounded by the scent of cedar. Inside, one can closely observe the details of the octagonal creation, the patterns formed by the wooden connections and the circular opening at the top.

It is the creation of A Liu, adjunct professor at Commonwealth University of Virginia and concept-driven designer at SMBW Architects. Liu, VCU graduate School of Arts master’s program in interior design, created “Helper” for the The Branch Architecture Museum’s Annual Design and Build Challenge, which he won. “Helper” will be in the museum until the end of the year.

Liu spoke to VCU News about its design, which aims to address the topic of wasted building materials by highlighting the impact people have on the natural world. Liu was born and raised in China and came to VCU in 2015 to pursue studies in interior design. The concept of the structure arose from his exploration of architectural design, community and current social issues.

When did you start planning the design of “Helper”?

At the end of August 2020, I set off on a path of self-exploration, going back to the first trip that drew me to VCU and the [United States]. I wanted to rethink the relationship between the manufactured environment and the natural environment. In architectural firms, we often worry about the appearance of the building, but I wanted to raise the question of the entire lifespan of the architecture, the materials consumed, where the material comes from and how it is going to be. seen, as well as the second life of the material.

The second thing I wanted to touch on are community values; What is community and how can we improve community? One thing that inspired me was a poster that read: â€œHope requires actionâ€. I tried to bring a sense of community involvement into the project.

I wanted to use recycled material. I was running around Richmond paying attention to construction sites to see what garbage was being generated, trying to salvage wood materials. One day, I saw a beautiful facade of a building in red cedar. Because wood usually comes in a rectangular shape, I was wondering where are the cuts? I tried to find a dumpster but couldn’t at first. Then I saw him about 20 meters away. There, in a corner, was the dumpster behind a concrete wall, hidden from the public. It was full of wood. So that’s where I got all the tips you’re looking at here.

Have you already planned the peaks?

No. I had four or five concepts before I got the cedar tips. After collecting all the wood from the dumpster, I returned and spoke with the contractor. I ended up going back there every week with my SUV. I gathered all the wooden spikes in my truck. I ended up collecting around 2,600 spikes in total when they finished building the building. At first I was trying to use cedar to build the idea I already had. But I felt like I was forcing the cedar tips to do something they didn’t want. When architect Louis Kahn was building, he asked the material what it wanted to be. I also asked the spikes, “Spike, what do you want?” The response was, â€œI want to dance. I want to be singled out and I want to heal. I want to have a conversation with you. The spikes also asked, “Why did I end up in the dumpster?” I want to dance in the air. I want to feel the breeze. I decided to change the design to celebrate the beauty of the tips, to keep the tip identity and to be pointy.

I have kept the sharp feeling. This feeling of threat, because I sense metaphorically that the spikes want to say to us, â€œIt’s not right to treat us like this. Spikes represent a menacing aspect that you can see in nature, but on closer inspection there is a beauty here.

When you stand in front, you feel the threat. But when you step into “Helper”, metaphorically and physically changing your position, the “Helper” becomes shelter, or your armor. He protects you. There is no sense of threat. There is a feeling of peace when you unite with the â€œHelpâ€ form. The differences inside and out are important if they metaphorically represent man’s relationship with nature.

The planters were donated by Richmond Community ToolBank and will be used for community gardens after the exhibit is over. All the wood used to build the “Helper” will be dismantled. The cedar will be used for community gardens and shoreline protection. The wood will be returned to DPR Construction for future projects. This answers the sustainability part of the story.