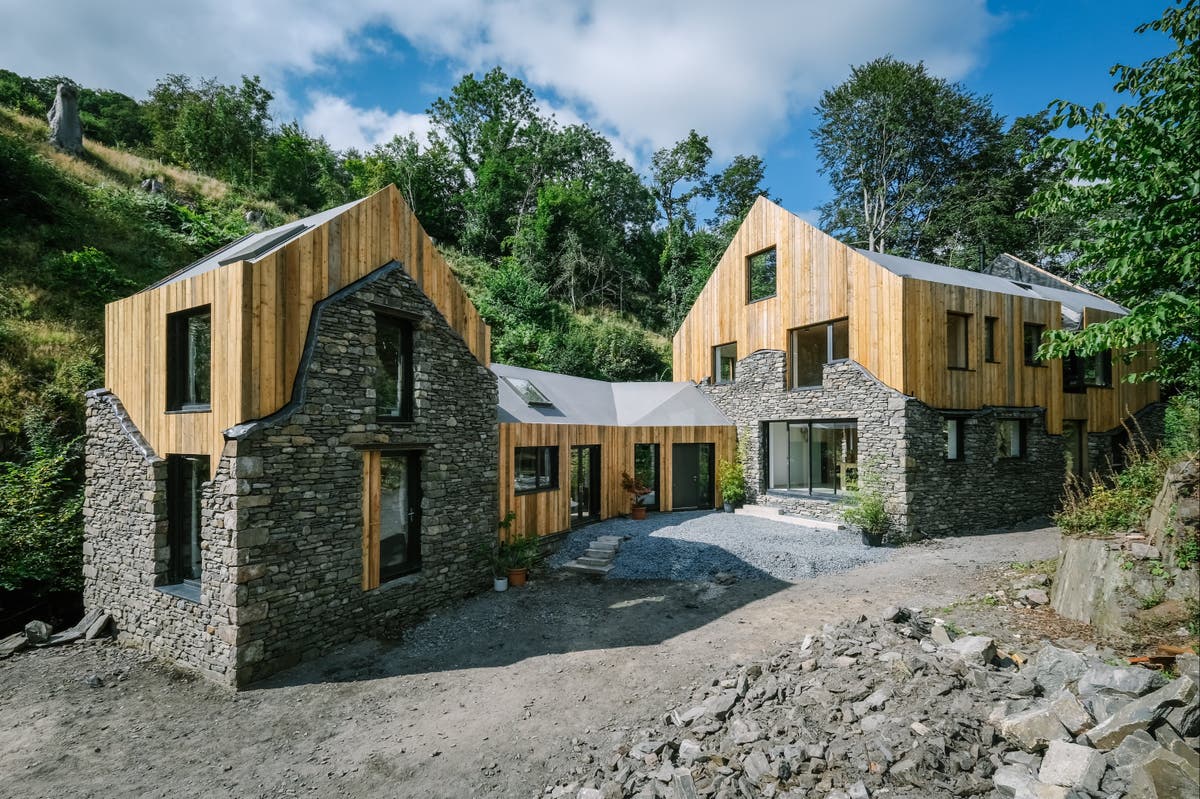 Beginning self-builders Rob and Ruth set out to restore an old protected mill in a secluded valley and build a contemporary new home within its crumbling walls in the latest episode of Grand Designs on Channel 4.

The Cumbrian-born couple plan to sensitively preserve the 200-year-old stone building that sits beside a bubbling river in a wooded Lake District valley.

Presenter Kevin McCloud is skeptical from the start. “What do you do with a ruin? How do you build for today while still retaining the history and romantic appeal that makes a ruin so alluring? And besides, could you live in one?

The construction guru has something to worry about.

Rob, 31, and Ruth, 27, met at the University of Manchester before going to work in London. The couple moved to Cumbria to undertake the whimsical project, which architect Rob has dreamed of for years. But the mill, which later became a pigsty, was recently reclassified as a “listed monument”, which means that any modification must be approved by the Secretary of State.

Bringing together savings and a loan from the father’s bank, the couple bought the site for £ 110,000 and have £ 250,000 to spend on construction. They will also have to secure a mortgage and pay off the loan – which is Rob’s father’s retirement fund.

The plans reveal two new buildings to rise from the ruin. The smaller southern building will be the office-workshop, the larger, more dominant stone shell will house the family house of 250 m² on two floors. Both will fit into the existing archaic framework.

The new structures will be clad in wood with sloping roofs glazed with fiberglass. The new house will have a large kitchen with huge seven-meter-wide bay windows overlooking the green valley, and a cozy corner on the ground floor. Four bedrooms will occupy the first floor with steps leading up to the covered roof terrace with seating, a dining area, plenty of space to grow vegetables and a pizza oven.

The project is fraught with pitfalls and dangers. With only 18 months in total to complete the project, simply clearing the rotten trees will take four weeks.

Rob and Ruth will have to spend £ 11,000 on a tree specialist who will cut down the dead trees that hang over the fragile structure. The 80-foot beech could easily fall and crush the stone building the couple desperately want to preserve.

The valley is inaccessible and therefore the team will not be able to use large machines, such as cranes, which would normally be deployed in such a situation. Hydraulic winches will be used instead.

Before the pioneering (and wholly inexperienced) curators can secure the ruin and begin laying the foundation inside its walls, they will need to remove 150 tonnes of timber from the site. Even if it was the greenery that attracted them to the first.

The couple will then be faced with their next challenge. On tender hooks, and before going any further, they await Historic England’s decision on whether the crumbling structure is safe enough to stabilize and build on. Alternatively, it may need to be demolished. If the heritage organization makes that decision, Rob and Ruth will see their beloved exterior walls – the soul of their future valley home – flattened.

It would “destroy the spirit” of the place, McCloud says. Not only that, but their already stretched budget and schedule should allow for the complete and painstakingly accurate recreation of the old mill walls, to exact stone, around the new properties.

Unfortunately, this is exactly what is happening. At the start of the project, Historic England declares the ruin dangerous for restoration. It’s demolished, leaving the valley – already cleared of all vegetation – “as if a bomb had hit it,” in the words of a shocked McCloud.

With a paltry budget, they have to rebuild it using Rob’s family as cheap labor. They stay well under budget but doing everything themselves means that at the end of their 18 month deadline, they are just laying the ground.

Another unforeseen stumbling block and a major setback is the need for a giant steel to connect the piece of the old gable wall left to the new house.

But as the timber sides of the building are split across the site, the imprint of the new property begins to emerge. “It’s twice as big as I thought it would be,” said McCloud, looking approvingly at the space where the huge kitchen windows will be. “The windows will slide back and the whole house will echo to the sound of the water,” he says.

Finally, once the wooden and steel house has been erected, the ruin is reconstructed piece by piece around it using until the last stone of the original walls.

After three and a half years, McCloud visits the completed project. Despite his reservations that “you can’t fake history”, Rob and Ruth (and their family) captured the spirit of the old mill while fashioning a new “super-modern” home.

The expert masonry gives it gravity as the lead siding connects the new and the old, while the house really seems to be sliding out of the stone. Building multiple personalities is a new take on what was there.

“To be clear, this is not a restoration, it is a new building. But it’s a tribute and a retelling of an old story in a new chapter, ”concludes McCloud.

Grand Designs is on Channel 4 at 8 p.m. Wednesdays.