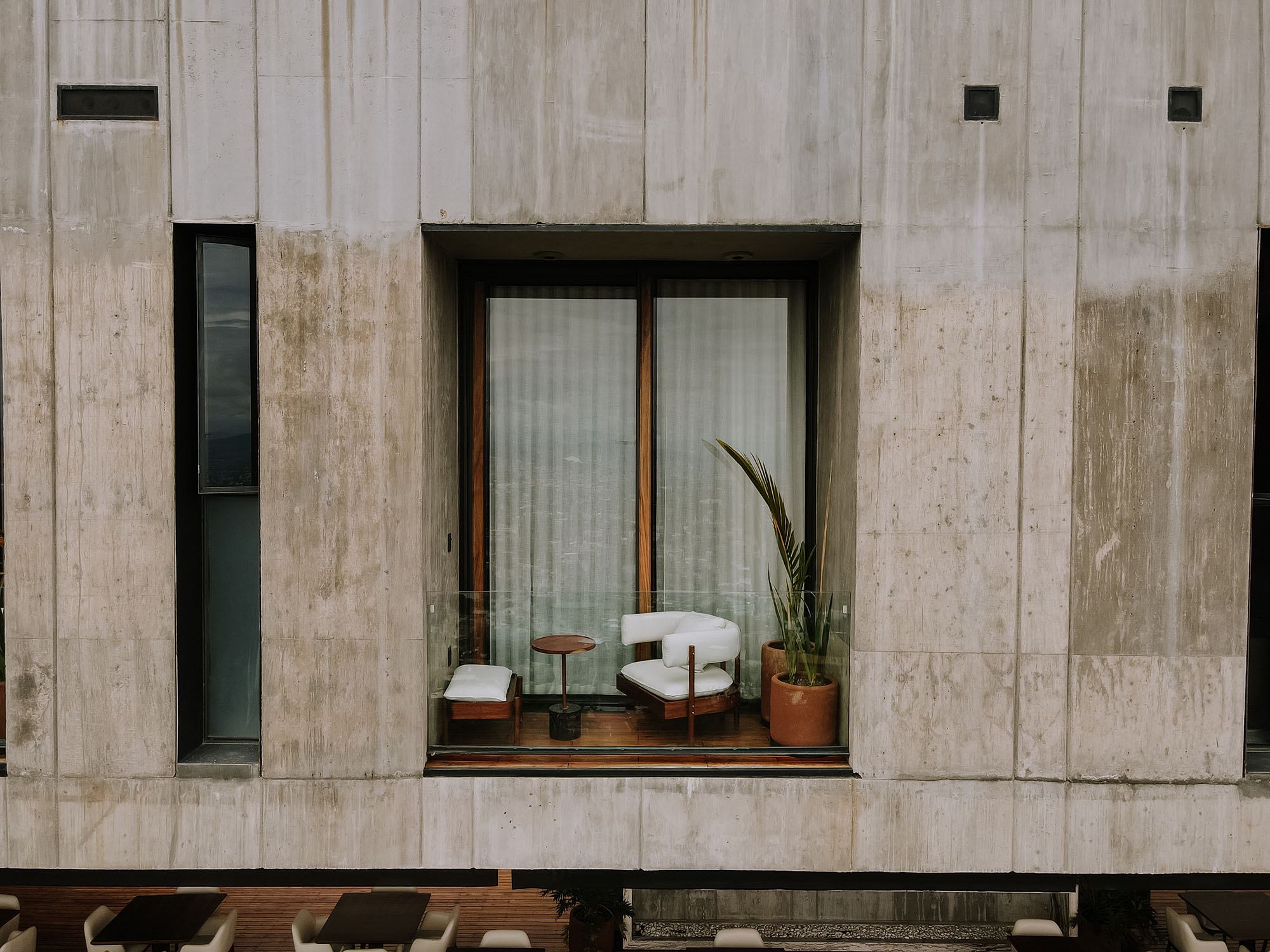 Flavia Hotel is a harmonious and livable sculpture in Oaxaca

The structure exists in easy harmony with the surrounding environment, while the design emphasizes the stark contrasts between its harsh exterior and the unconventional details of its highly sensory interior. In the lobby, warm, locally sourced teak wood wall panels meet the cool marble floors of the entrance, lined with LED lights to highlight the translucency of the stone. “Our goal was to seek a contrast between brutalism and shelter: a sculpture that becomes habitable,” explains Cæiro. The stark, raw concrete exterior gives no indication of the plush, eclectic interior of texture that lies within its gently sloping gray walls.

Originally conceived as a residential house, the project evolved halfway into an avant-garde hotel concept: several of the guest rooms were named after what would have been living spaces at the interior of the house. Each is utterly singular in form and function, yet all are connected in dialogue with each other – more like parts of a body than identical pieces in a collection.

The ubiquitous theme of stark contrast also informs the interior design of the rooms: an underground “bunker room”, located below the cactus garden, is so well lit from above that it looks like the antithesis of a real bunker. , with a cozy “tunnel” where guests can lounge in a narrow, fur-lined passageway that leads to a window overlooking the mountain valley. Artwork by local artist Sabino Guisu adds an atmospheric splash of neon blue light to the underground space. (Local artists Adán Paredes, Dali Nieto, Jesús Cuevas, Rolando Rojas, Francisco López Monterrosa, and Lucio Santiago also have works featured in all rooms.) Another subterranean suite, Cuarto de Maquinas, or the “Engine Room,” has its own private sauna built into one of the walls. Other rooms embrace the warmth of wood paneling dotted with botanical greenery, with large modern concrete soaking tubs in the center of the room or direct access to outdoor gardens. Upstairs, bedrooms have large open bay windows, sectional balconies and sweeping city views: in “Nube” (named after the Spanish word for “cloud”), a compact balcony opens skyward from the solid, straight angles of concrete.

On the rooftop, Hotel Flavia’s bar offers 360-degree views of the nighttime city lights and the valleys and greenery of the San Felipe Nature Reserve. Luis Zárate’s intricate endemic landscaping enlivens the raw concrete walls with an array of cacti, pochote trees, pitayas and aquatic plants, forming various gardens, courtyards, terraces and an organic vegetable garden from which guests are invited to discover the region. beauty on another sensory level.