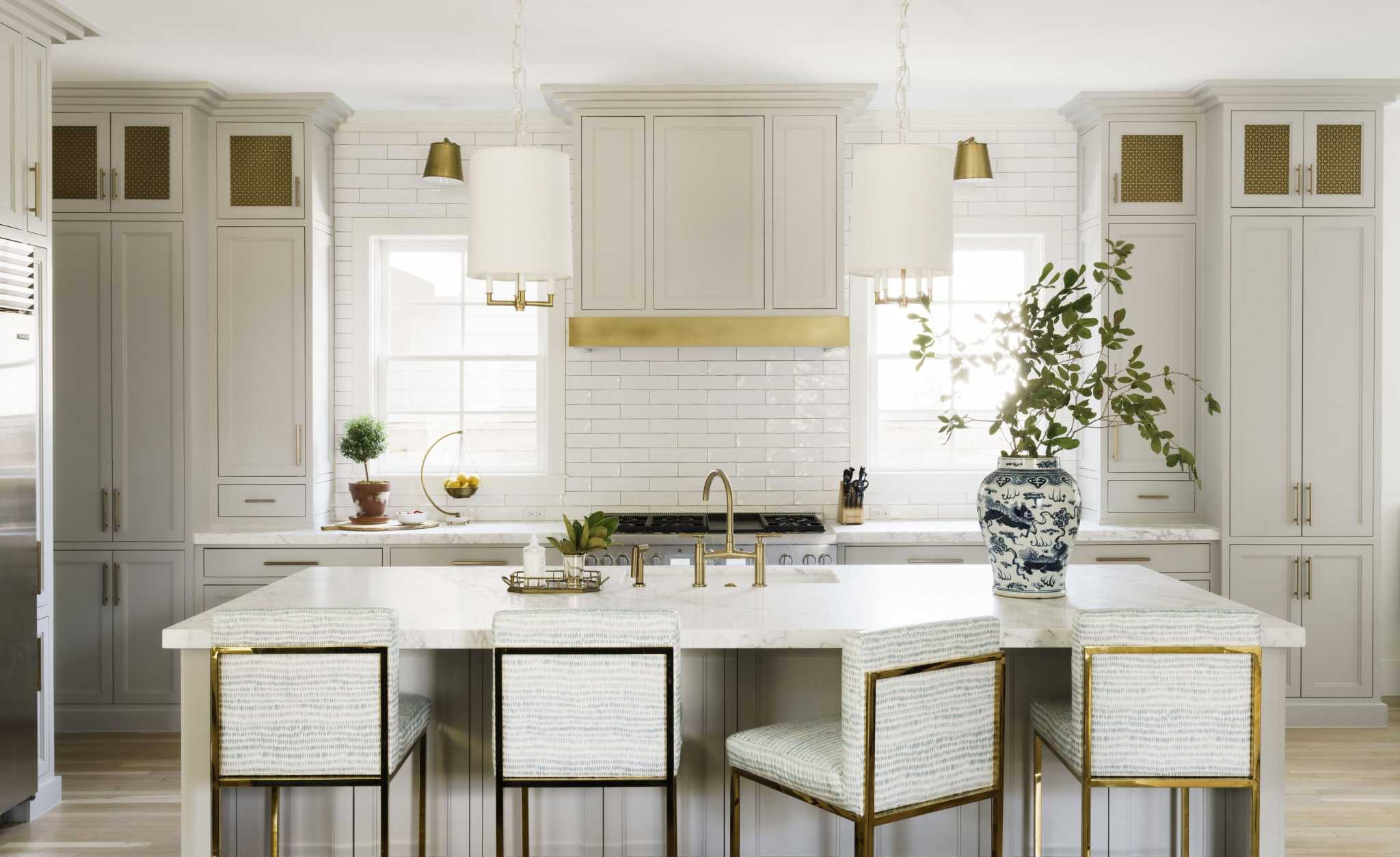 Colors and patterns add character to the Woodland Heights home

When Julie Gimlett goes antiquing to Round Top with Hallie Henley Sims, it’s not just a fun outing with one of her best friends – it’s a chance to spend the day with the interior designer who has helped transform the family home in Woodland Heights.

As she wanders from room to room, she’s quick to point out the things she’s found in various locations at the spring and fall antique shows: the lucite and brass bar cart in her living room before, the chinoiserie panels in her living room, the pendants hanging above the kitchen island and chairs in the dining room.

Gimlett and Sims, of Hallie Henley Design, met seven years ago through their daughters, who are the same age. Coincidentally, they both also have infant sons.

The Heights area home where Gimlett and her husband lived had lots of dark colors, so when she first visited the Sims’ home, she marveled at the combination of colors and patterns and the eclectic style. which mixed current pieces with vintage and antiques.

“I walked through his house and said that was what I wanted,” said Gimlett, who quit a job at an accounting firm when she started her family and recently started a new job in as a project manager for another Houston interior designer, Talbot Cooley Interiors. . “I wanted color, a mix of patterns and things you don’t see in stores.”

The Gimletts found the land for their current home after a builder – Ridgewater Homes – bought it and drew up plans for a new home. They could only tweak those plans a little, but they were happy with the 4,200 square foot size.

The couple moved to Houston from Connecticut eight years ago thinking they would stay for four to six years and move on. But they befriended each other and now say they will never leave.

When the pandemic started, they hadn’t been in the house long, and it became a hub of activity for the bubble of friends, not to mention their new pup, a labradoodle named Penny.

“Moms were opening bottles of rosé as they sat on the shallow pool shelf and the kids were playing in the side yard,” Gimlett said. “Good times. The dads will be (in the house) watching TV and we’ll be yelling at them to bring us another bottle of rosé, and sometimes they do.

Another place to entertain is the dining room, where Gimlett hosts family-style dinners. The walls are covered in a floral print in shades of blue with dark blue borders.

Green draperies draw color from a large-format painting by Lynn Sanders, and the chairs — a Round Top purchase — are upholstered in another blue print with peacock blue painted legs.

Between the dining room and the kitchen/breakfast area is a pantry and bar which they painted the same deep blue as the trim. The cabinet doors have a special treatment, with dark blue grasscloth wallpaper inlays, and an upper row of cabinets has wire mesh front doors, which continue into the white kitchen cupboards.

The island is oversized, but Gimlett didn’t want to settle for a counter with a grout line, so they searched high and low for a fairly large slab. They found it in a variant of Calacatta marble with a honed finish.

A corner nook contains the breakfast table, a brass-acrylic base with a glass top, a dark blue upholstered banquette and a pair of chairs upholstered in a Rebecca Atwood blue geometric print that has been laminated for a easier cleaning.

The front lounge — where many parties start with wine or cocktails — is more formal, with a mix of pale aqua, lavender, and neutrals.

The more casual family room has a dark blue sofa and a pair of swivel chairs, along with another chair they found at Round Top. The built-in shelves hold all sorts of accessories, from small works of art to books and Asian china.

At the far end of the room, a console table covered in deep blue grasscloth serves as a pretty base for the four-panel chinoiserie botanical scene.

Each space has a particular touch, notably a hallway with another console, topped with a series of round mirrors in the shape of pocket watches.

There’s also a glamorous powder-coated bathroom, with walls and vanity covered in a deep aubergine-colored paint – “Pelt” by Farrow & Ball. The purple hue pairs well with brass hardware, plumbing fixtures, sconces, and an antique mirror. The final touch is the wallpaper on the ceiling.

The four bedrooms and three full bathrooms are upstairs, as well as a boudoir that currently serves as a playroom for the couple’s two children and their friends. Built-in shelves hold baskets full of toys. The walls are pale green and a whimsical Katie Ridder print on the window blinds works well with the natural fiber pendant light and sisal rug.

The purple is repeated again in the master bedroom, with velvet on a tufted headboard and bed skirt, and a lavender footboard bench.

A dramatic chandelier hanging from a barrel-vaulted ceiling makes a statement in the master bath, with gray marble and a freestanding tub tucked into a niche.

Their daughter’s bedroom is as sweet as any little girl could ask for, with a lavender velvet headboard, pink framed mirrors and pink monogrammed pillow shams. The finishing touch is an artwork by Houston artist Mariel Sawicki, another friend of Gimlett and Sims.

Back on the ground floor, a screened porch gets a lot of use, as this side of the house gets the morning sun, so it’s cooler in the afternoons and evenings. The side yard contains a playground and the swimming pool. It is bordered by a row of dark pink crape myrtles, which contrast beautifully with the neighboring row of the same tree but with fluffy white flowers.

Inside a luxurious bath designed by Josh Manes Architecture

9 bedroom design ideas to decorate around a navy blue sofa

Unbuilt Scottsdale Mansion listed for $32 million, most expensive in Arizona