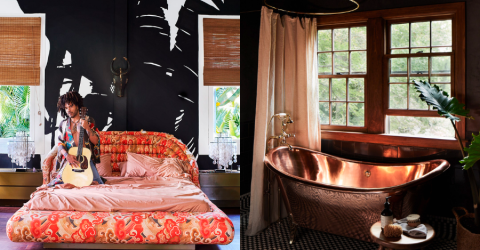 Celebrities have all the money in the world, and with that money, they can decorate their homes however they want. It’s no surprise that the way they go about decorating and accessorizing is different than the rest of us.

While we may not be able to live like them, we can certainly take inspiration from their home design and decorating aesthetic for our own humble abodes.

Be daring and improvise by decorating your home like Lenny Kravitz

Grammy-winning musician Lenny Kravitz was tired of the chaos in the city and got hold of an 18th-century Brazilian coffee plantation outside of Rio de Janeiro.

The busy bee described her home as “a place to unplug, reset your life, and take the time to be quiet and to hear from you.”

His interior decoration is a mishmash of things he has collected from his travels and tours. Due to his busy schedule, he has just shipped containers full of items and furniture that he enjoys and supervises the internships carried out by the workers via video calls.

â€œSome parts worked great, others didn’t. The process was very improvised, like making music. You have to play what you feel. Sometimes it’s about what you don’t play, â€he said.

He also invited artist friends to visit and make their own contributions to the decor. Fortunately, everything in the house has come together well and is as unique and cool as the artist himself.

Kim Kardashian and Kanye West’s home shocked everyone when they showed the world the super minimalist and monotonous colors of their Los Angeles home.

Working with renowned designers such as Axel Vervoordt, they transformed the suburban home into what looks like a ‘futuristic Belgian monastery’ in its muted white, cream and gray interiors.

Even the bathroom sink baffled everyone because of its seemingly flat surface with only a slit as a drain hole. Kim had to make a separate video to explain to fans how the sink works. Apparently, the unique sink was designed by Kanye to avoid any backsplash, regardless of the water pressure.

As wild as the design and decor of the house is, anyone can agree that the spacious bathroom overlooking the greenery outside is luxurious and to die for.

Since he’s still traveling or on tour most of the time, G-Eazy said he wanted a comfortable and welcoming place to come back. Because of this, his Hollywood Hills home is different from most celebrity mega houses, and he worked closely with interior designer Melody Jimenez to redesign his Spanish Colonial home from 1979.

He loves the color green and has incorporated the beautiful hue into his kitchen cabinets. G-Eazy also shows his support for his other artist friends by displaying their artwork around his house. Of course he has a professional grade recording studio where he worked on The Beautiful and the Damned album.

He likes to stay focused when creating and making music, so he has blackout curtains to cover the windows. As he spends a lot of time in the studio, the studio is decorated with comfortable furniture and also has a nice shower room.

Vanessa Carlton has said that she is a great bath person and strongly believes that all bathrooms should be about comfort. The singer isn’t afraid to be bold with color contrasts and has light and dark bathrooms. She really likes dark rooms that get a ton of light, which she says makes a bathroom less sterile.

In her Nashville home, her bathroom is adorned with a Roman clay finish on the walls, unique tiled floors, and a reflective copper tub as a beautiful centerpiece.

The copper tub is complemented by copper furniture over the sink taps and the mirror. Together the elements and colors create a luxurious bathing paradise.

Going back to basics like Elon Musk’s Tiny House

Elon Musk could easily spend millions on a huge house or design his dream house from scratch. Instead, he sold most of his real estate and moved to a small US $ 500,000 house in Boca Chica, Texas, which is close to Space X’s headquarters.

His house is reported to be a foldable, prefabricated house manufactured by Boxabl, a housing start-up. Named the Boxable Casita, Musk’s tiny house measures just 400 square feet in a 20×20 unit. It is laid out as a studio with a fully equipped kitchen, bedroom, bathroom and living room.

Musk wrote on Twitter: â€œMy main house is literally a roughly $ 50,000 house in Boca Chica / Starbase that I rent to SpaceX. It’s still awesome. The only house I own is the events house in the bay area.If I sold it, the house would be less useful, unless it was bought by a large family, which might happen someday.