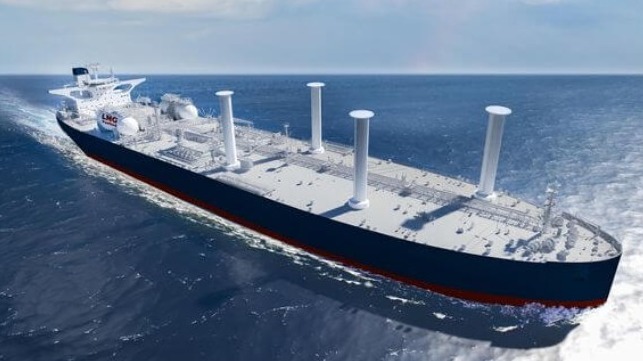 South Korean shipbuilder Hyundai Heavy Industries previews its rotor sail design as part of the company’s effort to focus on high-value shipbuilding and meet emerging demand for future vessels environmentally friendly that meet the demands of reducing CO2 emissions. The shipbuilder invests in the research and development of new technologies and reports that it has made significant improvements to currently commercially available technology.

According to Hyundai, the rotor sail is attracting attention as one of the alternatives to meet the challenges of global environmental regulations, as it can reduce fuel consumption and carbon emissions by six to eight percent when mounted. on a ship. While the Hyundai version is based on the same Magnus Effect science, however, the company said its design “improves the stability of the drive system over the belt method of existing commercial products by applying the method from the reduction gear to the driving part”. connecting the electric motor and the rotor.

Called Hi-Rotor, it was independently developed by Hyundai Heavy Industries, and last week the company announced that it had obtained approval in principle from Korea’s shipping registry. This builds on previous design approvals along with other technology improvements. Hyundai plans to begin on-land demonstrations in the second half of this year and actively seek product orders based on this design approval.

The rotor design is one of many measures the company is taking to “accelerate the development of new technologies related to environmentally friendly vessels in preparation for the era of carbon neutrality”. They said Hyundai Heavy Industries Group is also accelerating the acquisition of next-generation environmentally friendly technologies, such as the development of a wing-sail wind-power auxiliary propulsion device.

Ka Sam-hyun, CEO of Korea Shipbuilding & Offshore Engineering, the holding company of Hyundai Heavy Industries, discussed the company’s broader vision in a new interview with the Financial Times. Saying the company is working on multiple technologies, he predicts that LNG will continue to be important in the near term, but dual-fuel methanol vessels will emerge due to cost advantages. He pointed out that methanol does not require expensive cryogenic bunker tanks. He cited data from analysts who predict that 50 dual-fuel methanol vessels will be ordered in 2022, up from 19 last year.

In the short term, he thinks that ammonia remains too expensive and that there are still challenges to overcome regarding its toxic properties. In time, he believes the technology will make hydrogen and battery-powered ships possible.

Hyundai highlights its success at the top of orders in 2022, including for new technologies and environmentally friendly ships. The company has received orders for 41 vessels so far, surpassing 2021 orders. The company has been particularly successful with LNG carriers, receiving 22 orders so far in 2022 as the segment’s backlog reached a record 103 ships. They pointed out that the average price of LNG carriers has increased by about 10% so far in 2022, from $210 million to $230 million.

Hyundai says its controls are based on the latest technologies, such as the next-generation LNG fuel system (Hi-eGAS) and low-pressure LNG dual-fuel engine (ME-GA) and build performance capabilities.

What is the Market Authority adding to hospitality at High Point Market this fall?

Flavia Hotel is a harmonious and livable sculpture in Oaxaca