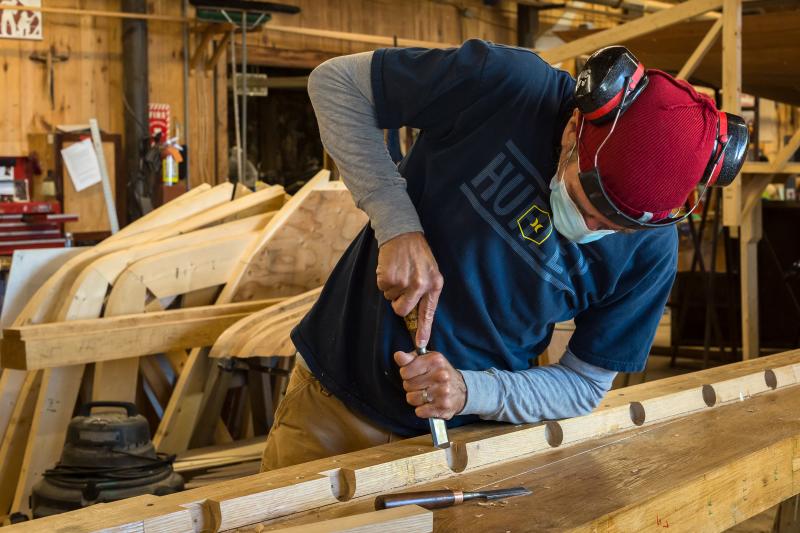 The Cliffy lines have been removed from the Luella B – a lobster boat ordered in 1930 from boatbuilder Clifford Winchenbach of Waldoboro, Maine. HH “Dynamite” Payson had the plans drawn up by Bob Lane in 2002. The Luella B was originally commissioned by Woodbury Snow, who named the boat after his daughter. It was used in the lobster trade from Snow to Metinic Island throughout the early 20th century. Luella Snow married Ralph Post in 1938 and they and their sons lived and worked on Metinic, continuing to use the Luella B until the boys are of school age.

The Cliffy Lobsterboat was captained by Lisa and John Dingle of Southport. The Dingles were introduced to the apprenticeship by Pam Burke and Allan Miller, who had previously commissioned a 24′ lobster boat (the Henry and Theo) designed by lead instructor and master builder Kevin Carney. Apprentices Rick Kraft and Joshua Wiles began work in the fall of 2019, and after a hiatus of approximately 5 months in 2020 due to COVID, construction has resumed. Since then, a small team of apprentices, including Tabitha Gish, Joanie Park, Colin Cornwall and Taylor Pierce, have worked on this typical Maine boat under the direction of colleague Rick Kraft.

Recently, the Post brothers visited the shop to see their grandfather’s lobster boat brought back to life. Lisa Dingle and the apprentices working on the Cliffy were delighted to hear the stories of life and lobster fishing off Metinic Island during the war years and beyond.

In an ApprenticeShop press release, Rick Kraft said of the reunion, “I felt honored to have the Post brothers visit the project. The stories they told about life in Metinic really brought the Cliffy to life. I felt a deep connection with the Post brothers, the builders and Lisa all together around the boat representing its past, present and future.

Lisa Dingle adds: “The whole process, every step of the way, brought together this mix of incredible people, knowledge, talent and creativity. To have the chance to meet the three brothers and to be there as they shared their stories and memories of this…very special boat.

In addition to celebrating the reincarnation of a historic Maine vessel, the June launch represents 50 years of The Apprenticeshop’s mission to inspire personal growth through craftsmanship, community and the traditions of the sea.

Since its founding in 1972 as part of the Maine Maritime Museum in Bath, The Apprenticeshop has built resilience, ingenuity and confidence in people of all ages through experiential education in traditional wooden boat building and seamanship. Check www.apprenticeshop.org for more information on Summer Sailing Courses for Youth and Adults, Boat Building Apprenticeships and our 50th Anniversary Celebration July 17-23.

This week at The Bookworm: Focus on interior design