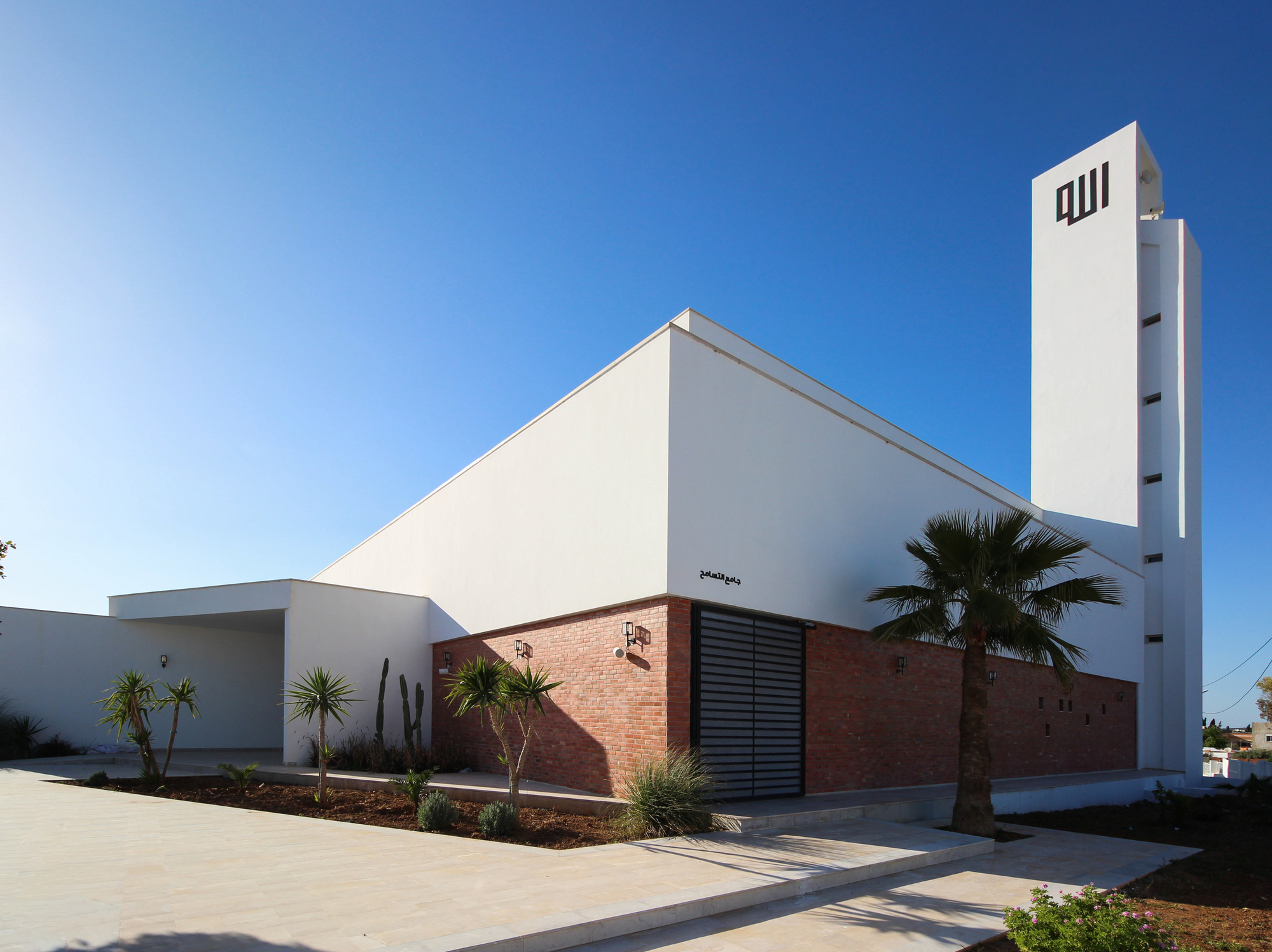 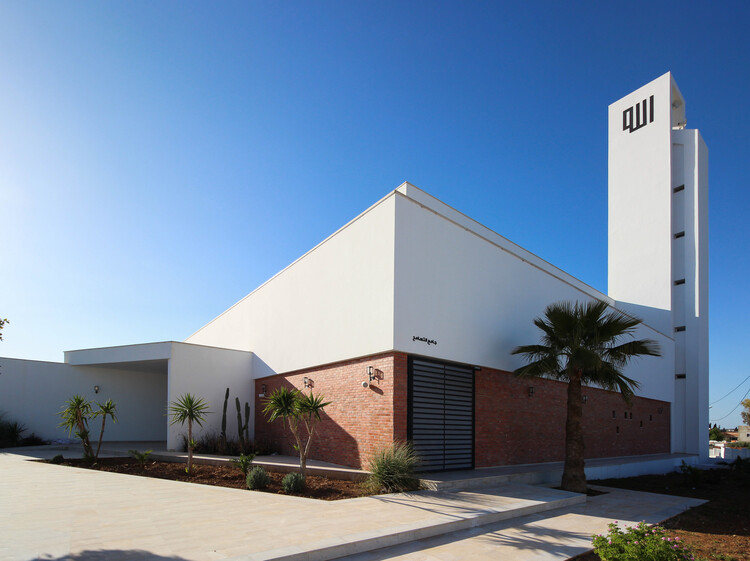 Text description provided by the architects. The project is a mosque which bears the name of Al-Tasamoh Mosque, located on a plot in the area of â€‹â€‹Sanhadja, a village located in the governorate of Mannouba. The project was above all an opportunity to respond to the desire to participate in the adoption of a new approach in the design of mosques in Tunisia and the change of attitude of the population vis-Ã -vis traditional external forms of these buildings and to go beyond the richly ornamented spaces, this facet of mosques whose image clutters the collective memory. With this in mind, the mosque was designed to combine the fundamental bases in terms of spaces and elements of high symbolic value such as the Minbar, the Mihrab, the Minaret, and the prayer hall … with a sober architecture. and contemporary.

More specifically, the mosque is characterized by a simple geometry derived from a minimalist architectural attitude creating an overall uncluttered atmosphere, free from any heavy substance or form, and this choice to avoid ornamental elements and to overcome complexity stems from a reflection on the relationship between the essential and the functional. Indeed, the mosque was conceived as a space which allows to think, to meditate, to be in direct relation with God, to declutter emotionally and spiritually, to escape from the material being and to let go of the material worries. unnecessary, to exclude anything trivial and to focus precisely on the essential.

Indeed, the volume is defined as a whole by the simple and refined composition of parallel lines creating two monolithic volumes integrated one into the other, conceived as a box within a box or rather “a double volume”. The first, which contains the prayer room, is enveloped by a second which forms a second skin. This second volume constitutes, on the one hand, a climate adjustment tool, since it protects the room from direct sunlight and rising temperatures during heat waves, regulates heat input, facilitates the natural cooling process. and provides a cooling effect that promises to generate an indoor atmosphere that guarantees human comfort in a cost-effective, energy-efficient and more sustainable way. On the other hand, at the spatial level, this volume forms a gallery that connects the three entrances designed for the mosque in order to allow efficient and simple circulation between the different spaces.

Thus, this gallery surrounds the prayer room, itself characterized by a minimalist aesthetic and a stripped interior bathed in light and whiteness. Upon entering the prayer hall, the eye is instantly captured by a slight crack emanating from above. In fact, the idea was to symmetrically create two skylights that delimit the room on both sides, like a vent open to the sky for daylight to radiate and flood the room, two zenith openings that create limitless walls, one infinite breach that looks like an extension of the sky and also allows to scan the horizon through this scintillating line, a journey of the soul towards God who allows to receive and reach the light of the infinite. In the center of the prayer hall, an axial aisle leads to the Mihrab at the back, decorated with a particular element. This masterpiece creates the event in the sobriety that permeates the room, celebrated as a focal point adorned with a calligraphic verse from the Quran in Arabic, embracing the impending light of the flowing sky and forming a sacred halo enriching the details and producing a diffuse effect which delivers a mystical and appreciable quality of light.

So, overall, the idea was for the outer physical light to be the soul of the mosque that shines everywhere and is reflected in the minds as an inner spiritual light. That is to say, conceptually and spatially, the sun has been studied in such a way that it intervenes generously and abundantly in all areas. Furthermore, all of these light sources also form sources of fresh air with carefully thought-out shapes and locations in terms of design, orientation and airflow requirements to allow air to circulate and naturally ventilate the building and create interior spaces. with a cool climate and prove that even today mosques without air conditioning can be comfortable and pleasant to live in. Another fundamental element of this project is the patio. Indeed, the mosque is articulated around 4 voids which serve on the one hand as unifying spaces and separating elements, and on the other hand as tools allowing the admission of natural air and light.

The large central patio, both a terrace as an extension of the prayer hall where people can gather and socialize after prayer times, is an open passage of separation and transition that serves as an intermediate area between the hall. prayer room and the ablution area which also opens onto two small green patios which act as skylights and sources of air. In addition, this open-air courtyard is delimited on one side by a wall pierced with small square openings filtering the light towards the ablution space, offering visual connectivity, and is clad in red bricks. In fact, it is the material that was chosen to cover the entire lower part of the mosque in order to create a kind of earth-colored textured skin reminiscent of the original and authentic nature of the human body, and contrasting with the upper part which is smooth and all white in the image of essence and soul, so the earthy touch of color makes white more pure and white makes the color more vibrant. In addition, a range and a combination of various types of plants that cover this wall creating a small “indoor” forest have duly enriched the patio and allow to create a haven of peace and a resolutely soothing and relaxing atmosphere.