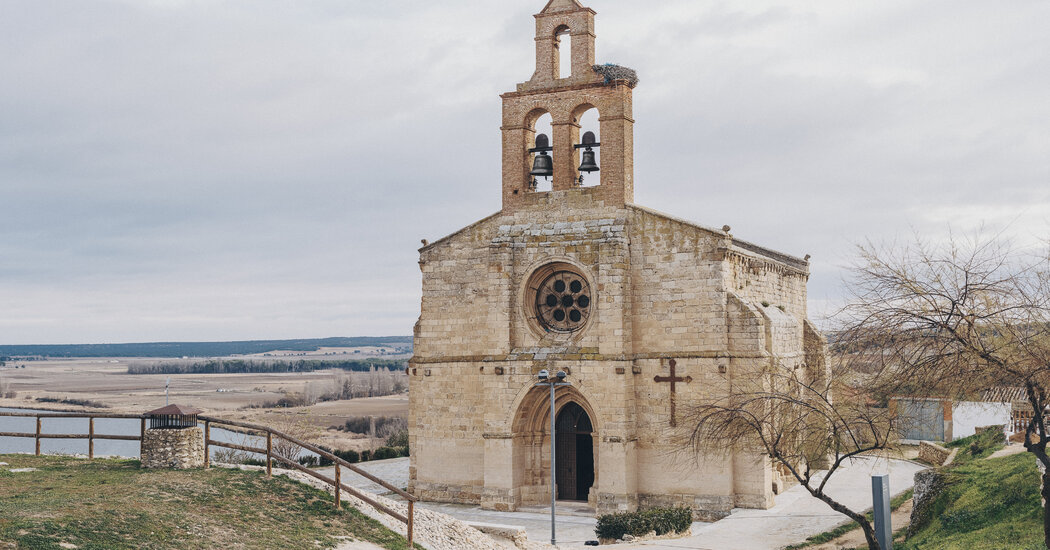 A Spanish mystery: Is a “masked restorer” to blame for the botched repair of a church?

CASTRONUÃ‘O, Spain – The Romanesque church that stands above the river in the Spanish village of CastronuÃ±o looked like many others dotting the country: not too run-down for a 750-year-old man, but not particularly well-maintained no more.

Then in November, Mayor Enrique Seoane noticed something that shocked him and caused a scandal in Spain.

In a photo taken by one of his neighbors, Mr. Seoane saw a very modern seam of cement that someone had sunk into a decidedly ancient archway. It was apparently a homemade repair job to prevent the east flank of the church from collapsing.

The work was carried out by an unknown “masked restaurateur”, the mayor told a local reporter in a story that quickly spread across Spain.

While it may evoke visions of a superhero secretly helping an aging church, this is not how the mayor’s words played in Spain. Instead, they awoke bad memories in a country whose small towns and villages had previously been scarred by the horrors that this kind of vigilante redress efforts leave behind.

The figure of the benefactor gone wrong was embodied in Spain by Cecilia GimÃ©nez, a grandmother then in the 1980s, who made headlines around the world after her botched restoration of a century-old fresco of Jesus crowned with thorns called “Ecce Homo”. The result was so failed that the authorities initially thought that the painting had been vandalized.

Spanish art and architectural restorers have sworn to arrest these amateur and unwanted restorers.

However, in CastronuÃ±o, in the province of Valladolid north-west of Madrid, a mysterious character had struck again, this time at the Church of Santa MarÃ­a del Castillo, built around 1250 by the Knights Hospitaller of Saint John of Jerusalem.

Miguel Ãngel GarcÃ­a, spokesperson for the Heritage Association of the Province of Valladolid, a small consortium of local residents who try to prevent this kind of parody, among his other conservation efforts, came to take a look to damage during a recent freezing evening. He looked up at the cement, sadly, as the wind blew through a stork’s nest in the church steeple.

“The story of ‘Ecce Homo’ keeps repeating itself across the country,” he said.

You could say that CastronuÃ±o’s problem is Spain’s problem: this ancient land just has too many old things to fix. There are Phoenician forts, Celtic castles, Moorish minarets, Roman ramparts, Greek granite tombs – all left behind by past civilizations that came here to conquer, all determined to leave something to posterity.

Even the name of the Spanish heart, Castile, means something like â€œland of castles,â€ as many were built after 800 years of battles between Christian and Muslim rulers.

As she stood in front of the damaged CastronuÃ±o church one recent day, Mar Villarroel, a children’s book writer who is also the hamlet’s part-time tourism promoter, observed that while Spain’s blessing was on ‘she had so much history, so her curse was that so much was in danger of being lost through negligence.

Take the old castle, she said, whose village had been named, but which had been razed by Ferdinand II of Aragon during the time of Columbus. Or CastronuÃ±o’s first church – built even earlier than the one in use today, but demolished in 1919 (decades after its roof collapsed).

More recently, the villagers had begged the government and the Roman Catholic Archdiocese to come and repair Santa MarÃ­a del Castillo before it suffered the same fate.

But with no sign of help on the way, someone was urged to take matters into their own hands.

â€œCement is a scandal, it’s ugly, yes,â€ Ms. Villarroel said. “But do you want to know the real scandal? It is because the leaders let the church do so.

JosÃ© Antonio Conde, a sort of church keeper called a sacristan, was trying to find the key one evening recently. Only four people had copies, he said, and at least three appeared to be out of town. Finally, a sister of a child picked up the phone. He rushed to find her.

A few minutes later, he opened the old creaking door. The church was almost dark, and as the eyes got used to the semi-darkness, the interior slowly appeared: a long nave, an old stone roof, and a crucifix at the altar in front of a red drape. The large river stones that had been brought up the hill during construction had each been signed with the mark of the old mason who had cut them.

Mr. CondÃ© found the switch, and the rest of the church was suddenly visible.

The damage couldn’t have been more obvious. Years of water seeping into the exterior walls had left long white mineral stains, giving the appearance of a cave interior.

The retablo, the large wooden shelves that rest behind the altar, had been professionally restored, but the humidity threatened them again. It was too late for the 18th century frescoes that once showed scenes from the life of Jesus: only one was fully visible, that of Christ carrying the cross.

“We could still distinguish them when we were children,” said Manolo Brita, a friend of Mr Conde, who had entered behind him.

M. CondÃ©, pointing to the choir near the old rose window, recalled another childhood memory, now long gone for several decades. â€œI remember when this choir was full of kids,â€ he said. “It’s not now.”

And that absence, he said, was the real reason the church was collapsing: because the population of the village was shrinking and there was little left to look after it. The population had grown from more than 1,500 when he was young to around 860 today, as part of a rural leak that has plagued villages across Spain.

While the mayor’s report this fall from a “masked restaurateur” sparked furious calls for an investigation to find the culprit, information that later surfaced both complicated the thriller and underscored how long these interventions lasted. wandering women tormented the country.

A local resident, while browsing an aging book on churches in the area, noticed an image that showed the same cement joint on the arch at least as early as 1999, when the investigation was published. With the crime apparently at least two decades old, it seemed impossible to find out who had committed it.

Sitting in his office, Mr Seoane, the mayor, said he regretted if his comments made people think there would be a manhunt for the culprit. But the fact that no one had noticed that the glue had been there for all these years was also telling, he said.

And it wasn’t just the poorly managed cement repair job that was now causing people to do a double take. Who had installed the alarm system which seemed to have been pierced in the ancient stone? Or the bulky electrical conduit sticking out of one of the old windows? He seemed to be there for years, mostly unnoticed.

And why was there a wire mesh covering the rose window, and who had put it there?

The list of impromptu repair work now noticed at the church suddenly seemed endless. But at least the sloppy cement work – and the mayor’s colorful, though fictitious, description of the assailant’s appearance – had caught everyone’s attention, enough that Mr. Seoane thought he finally could. obtain funding to repair other items that needed to be repaired.