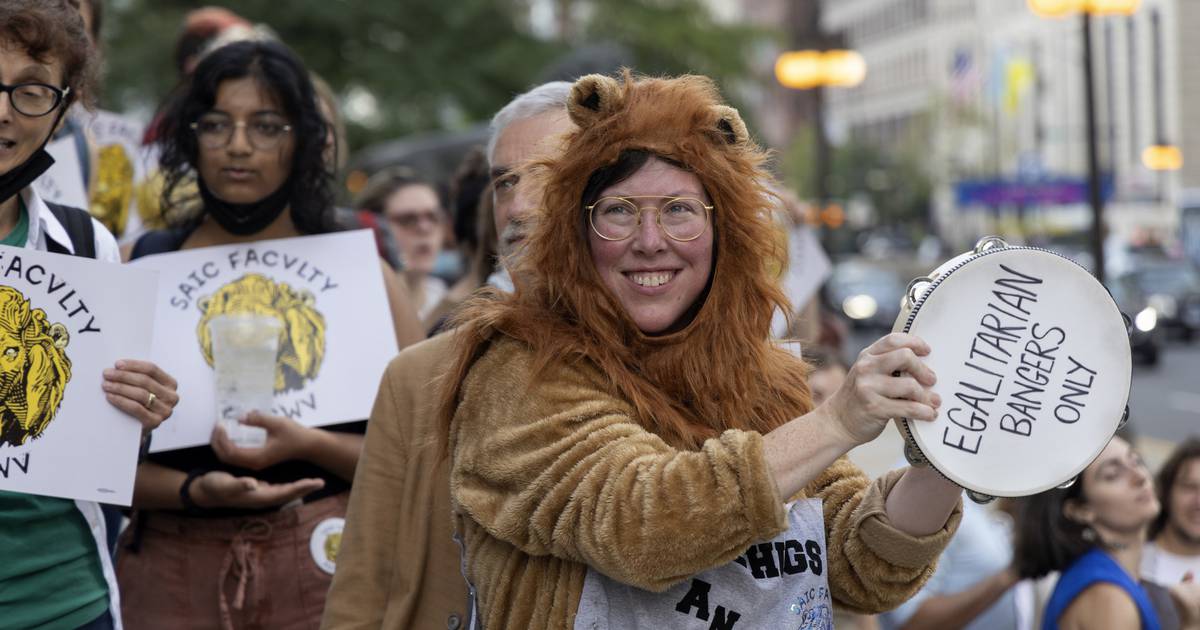 Non-tenured faculty at the School of the Art Institute of Chicago have asked the school’s administration to voluntarily recognize their union.

A “strong majority” of the faculty’s bargaining unit, which includes some 600 adjunct professors and lecturers at the school, have signed union permission cards, members of the school’s organizing committee said on Wednesday. faculty in a letter to school president Elissa Tenny.

The school’s adjunct teachers and lecturers gathered outside the museum late Wednesday afternoon, calling for job security, higher salaries and health insurance for lecturers, who teach without it.

“We’re adding our hard work and strong voices to a whole movement that’s growing across this country,” said Elena Ailes, an assistant assistant professor at the school who teaches sculpture and first-grade fundamentals.

“We elevate the notion that teaching is work, cultural work is work, arts educators and cultural workers are workers, and our work has value,” Ailes said.

“There are so many of us that if we took a day off, this school wouldn’t work,” said Anjulie Rao, a lecturer who teaches in the department of architecture, interior design and design objects and design. arts journalism. “And yet they treat us like the most disposable employees they have. We are teachers’ construction workers.

Art Institute staffers formed the city’s first major museum union when they voted to unionize 142-44 in January. Museum school staff quickly followed with a vote of 115 to 48 for the union. If non-permanent faculty succeed in unionizing, they would form a separate third bargaining unit under the union umbrella.

If the school does not voluntarily recognize the union, the faculty will file an election application with the National Labor Relations Board. Workers would then need a simple majority vote to unionise.

In a statement, SAIC communications director Bree Witt said unionization was a decision the faculty would make “individually and collectively.”

“If a union is elected, we look forward to working with the bargaining team,” Witt said.

Aldus. Susan Sadlowski Garza, 10th, spoke out in support of the faculty union on Wednesday, as did state Rep. Delia Ramirez, who is running for Congress.

“We know this school has a world-class reputation, and that’s thanks to all of you here,” Ramirez said. “But the administration doesn’t recognize everything you do.”

SAIC non-tenured faculty first announced their intention to unionize in May. Nearly 200 deputies and teachers at the school signed an open letter announcing the union campaign, calling their working conditions “intolerable”. The school’s two-tier pay and benefits system creates a “permanent underclass of contingent faculty,” they wrote.

In May, school president Tenny and provost Martin Berger said in an email to the part-time faculty that they “did not believe unionization was in the best interest of the faculty or the school”, but that they would negotiate with a union if one of them were elected. .

If the untenured faculty succeeds in forming a union, it will more than double the size of the Art Institute of Chicago Workers United, which currently represents about 500 workers. Union members include curators, retail workers, librarians and museum guards as well as educational advisers, administrative assistants and mailroom workers at the school.

Workers would be represented by the American Federation of State, County and Municipal Employees, which represents unionized museum and school workers as well as other utility workers nationwide, including at the public library. from Chicago. In recent years, museum workers, including the Museum of Contemporary Art in Los Angeles and the Philadelphia Museum of Art, have also unionized with AFSCME.

After gathering on the steps of the Art Institute on Wednesday, faculty members and supporters marched to the Sharp Building, a building on campus where they say President Tenny was hosting a school event.

“What is outrageous? Poverty wages,” they chanted outside the building.