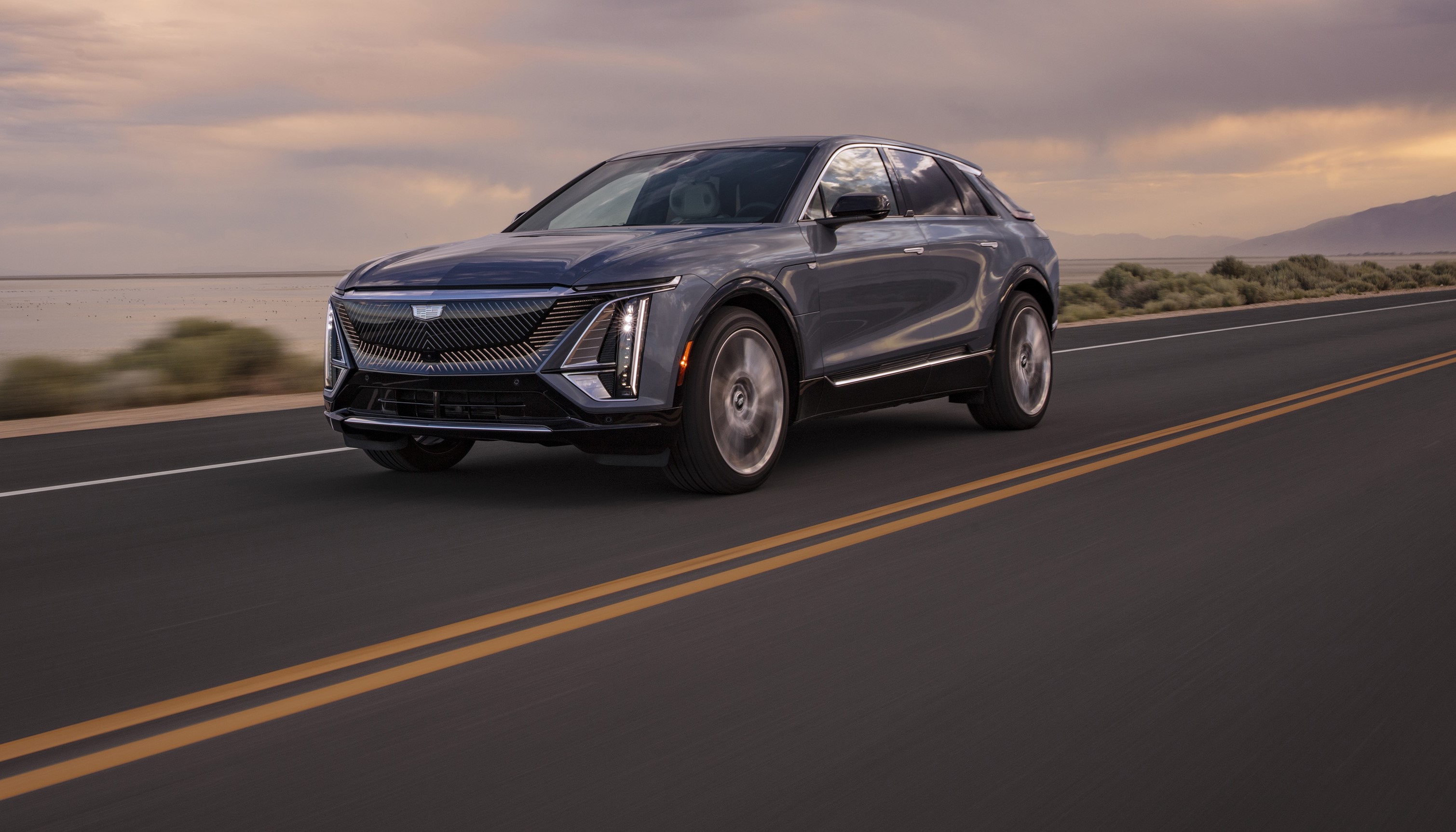 The first was the GMC Hummer EV pickup and Cadillac’s Lyriq CUV arrived in a few weeks.

Some call the Lyriq the first real competitor to Tesla’s legacy automakers, the dominant BEV maker with nearly 70% market share in the United States and the best-selling BEV (Model Y), according to data from Wards Intelligence. .

Is the Lyriq a Tesla killer? Having driven it here, it has the potential to be, but there are reasons why it may struggle, although they have little to do with the quality of the vehicle.

The boldly styled, state-of-the-art CUV rides on GM’s new modular skateboard deck using Ultium lithium-ion cells, from GM and LG Energy Solution’s joint venture of the same name. Twelve to 24 cells are placed in modules and packs contain up to 24 modules. The Lyriq has a single 12-module layer, unlike the Hummer EV’s 2-layer, 24-module pack. Thus, the Lyriq’s pack is rated at 100 kWh, half that of the larger GMC.

The pack’s estimated range, in the badged Launch Edition 450e rear-drive Lyriq driven here, is 312 miles (502 km), somewhat competitive with the ’22 Tesla Model X. This Tesla, closer in size to the Lyriq than the smaller Model Y, is all-wheel drive only with a range of 311 to 348 miles (501 to 560 km), according to the U.S. Department of Energy and EPA.

The RWD Lyriq is equipped with a 250 kW (340 hp) electric motor developing 325 lb-ft. (441 Nm) of torque at launch. Production of an all-wheel-drive Lyriq, with an additional motor on the front axle, is scheduled for this fall.

Cadillac Vice President Rory Harvey said the Lyriq’s exterior received the best feedback in customer clinics of any model in GM’s history and, as expected, the vehicle turning heads on our rural route outside of Park City.

For a luxury BEV, the Lyriq has an appropriately futuristic appearance: low-slung, angular, with short overhangs, a steeply angled D-pillar and vertical daytime running lights. It looks busier than a Tesla, but that’s a good thing because it stands out rather than blends in with the current crop of CUV BEVs.

The Lyriq also features a fully glazed panoramic roof and large (20-inch or 22-inch) wheels and tires, with executive chief engineer Jamie Brewer noting that it was one of the first wheels and tires designed by GM for aerodynamics.

The aluminum wheels have inserts for better aero and the wheels have been designed to be stiff to reduce NVH, which is essential in a BEV that doesn’t have the engine noise of an internal combustion engine model. to hide other sounds.

With that in mind, the Lyriq also features active noise-canceling technology via AKG speakers, with four accelerometers at the four corners of the vehicle measuring and predicting inputs from the road and translating them into a frequency.

We find NVH good overall during our time behind the wheel, although there was some noise from the wide tires on a few rough aggregate rural roads.

Due to its width and low center of gravity, largely due to the heavy under-cab bag that is integrated into the CUV’s structure, ride and handling are good and cornering flat.

Ride quality is more on the comfortable side than the athletic side, even in sport or touring driving modes. The Lyriq has a short/long 5-link front suspension on a hard cradle for more precise steering and a 5-link independent rear suspension, the latter with a small overall size to maximize battery width, says Brewer, adding adjustable dampers adjust frequency without taking up space or adding mass.

As in many BEVs, the Lyriq features single-pedal driving, with the high setting equivalent to 0.3g of deceleration, with a paddle held to the steering wheel adding an additional 0.05g, for a maximum of 0, 35g. We’re sensitive to extreme engine drag in BEVs, but luckily it wasn’t too nauseating.

It also helps us regenerate nine miles (14 km) of overall range during our 75-mile (121 km) run. We start with 239 miles (385 km) of range and after our first 38 miles (61 km) we lose 34 miles (55 km) of range. Air conditioning, typically the most power-hungry of any BEV, is on, with driver and passenger temperatures set to the mid-60s, but with only one fan speed bar selected.

On a second stage, because we’re using sport mode a lot and driving more aggressively overall, there’s 157 miles (253 km) of range left after 27 miles (43 km). But by the time we get back to Park City, thanks to the one-pedal function set to up-and-down coasting, we finish our second stage with 166 miles (267 km) of range, more than making up for our hot-dogging.

Like most BEVs, the Lyriq has a spirited character, although we found the throttle to be slightly binding when driving at medium speeds. BEV torque can be tricky to access easily and we’re guessing Cadillac is keeping that experience for the 500-hp AWD twin-motor Lyriq arriving later this year.

The Lyriq is as cool inside as it is out, filled with artistic flair, high-quality materials and the attention to detail that is needed for a competitive luxury interior in 2022 and previously lacking in GM models. 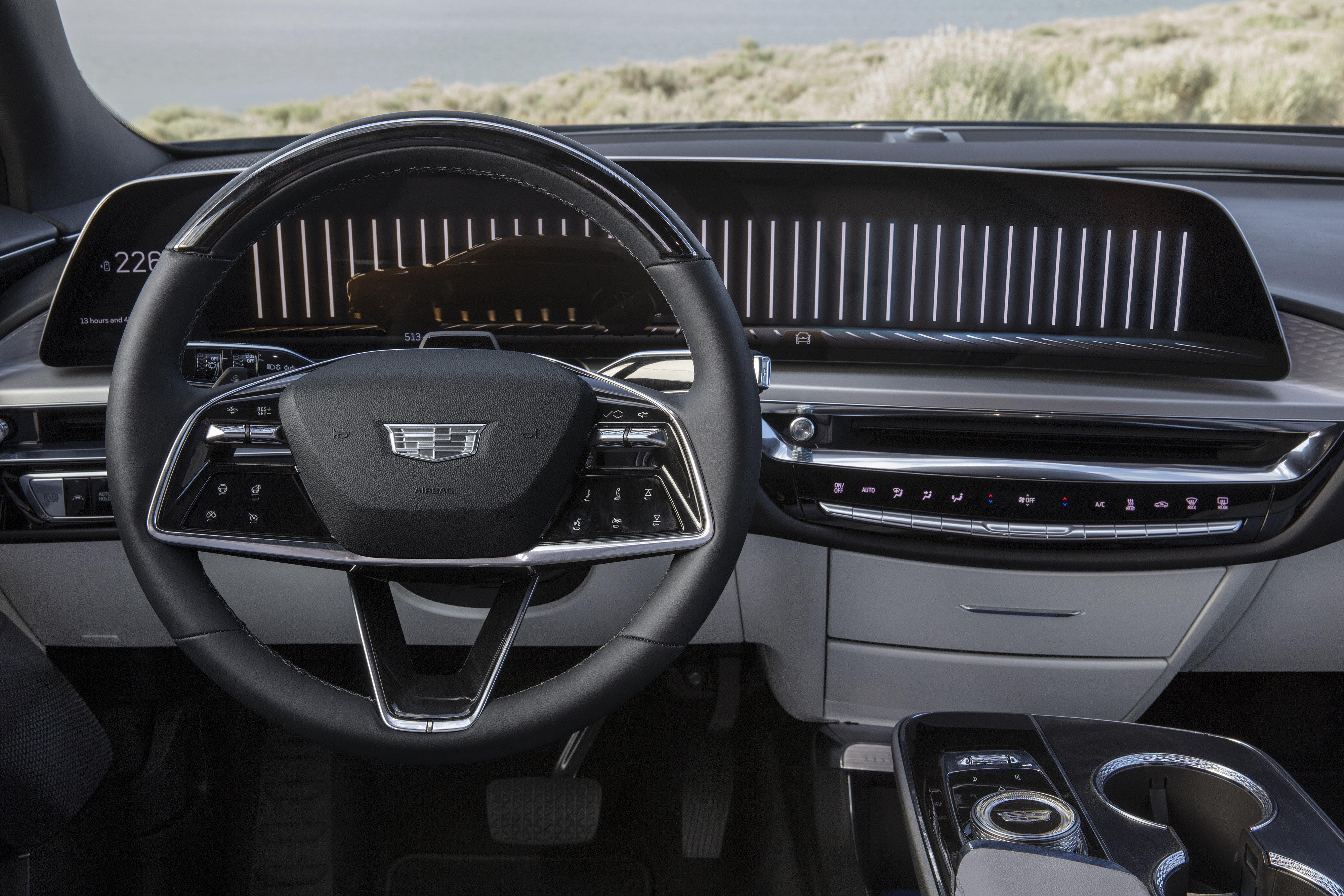 Knobs are knurled, cupholders have textured floors, a pull-out tray is royal blue inside, as is the piping running down the center of the seatbacks. The leather seats are perforated in a raindrop-like pattern, and the drilled metal trim on the doors is transparent so ambient lighting shines through the night.

Fit and finish are good in our testers, with snug fits, including trim on the pillars – an area where discrepancies tend to be common.

Vowing not to use GM aftermarket parts, what you see inside the Lyriq is new to Cadillac, Murphy says, though it’s not necessarily unique to Lyriq as some of the materials and shapes will likely show up. in the brand’s future models.

A centerpiece of the interior is a massive, seamless, 33-inch. (84 cm) LCD display screen showing typical information on the instrument cluster on the left and behind the steering wheel, and infotainment functions on the main screen in the center of the dashboard. The operating system is via Google, with Google Maps and Google Assistant featured.

The latter responds to our requests flawlessly and with incredible speed. Google Maps, while beloved on many smartphones, is rather short on information in the Lyriq, with some data that would be apparent on a phone hidden or unavailable on the map screen, presumably for a clean look.

But we like the charging station locator. A simple tap on the icon below the info box on the main screen quickly brings us a list of nearby chargers, letting you know how many Level 2 and slower DC fast chargers are available at each station and the driving time for each.

Passenger comfort is good. The front seat bottom cushions are long enough for good thigh support, although the driver’s seat back cushion lumbar support isn’t as robust as we’d like. Paradoxically, it seems, based on recent tests of other vehicles, that the cheaper the vehicle, the better the support for the lower back.

We briefly test the vehicle’s advanced driver assistance technology. GM’s Super Cruise is not yet functional in these vehicles, but is expected to arrive as a live update later this year.

Adaptive cruise control works well for a short time, but it’s hard to locate and make out the small ACC icon and speed reading on the cluster display. A head-up display usually has more prominent ADAS iconography, but there’s no HUD in the models here. A Cadillac official said a HUD will be available later this year, possibly with augmented reality similar, but not identical, to that of the Escalade.

The vehicle as a whole is beautiful, but as mentioned there are some things that will hold it back. Namely, the Lyriq will not be easy to find. Cadillac does not release numbers, but Wards Intelligence forecasting partner LMC Automotive predicts production of just 3,000 Lyriqs this year and just 19,000 more in 2023. All units for model year 23 have already been pre-sold, says Cadillac, which has just opened orders. for the ’24 Lyriqs on June 22.

It’s going to be hard to “kill Tesla” with only 22,000 vehicles. Clearly, GM has a huge mountain to climb to get production of its Ultium BEVs up to the hundreds of thousands of BEVs that Tesla can assemble per year. Hopefully it can find more batteries (and chips) to ramp up Lyriq production sooner than later at its Spring Hill, TN factory.

Another problem is charging. GM is relieving the pain of the rather dire state of public charging by paying $1,500 to install Level 2 home chargers with Qmerit, but there will be times when public charging will be necessary.

The non-Tesla charging infrastructure in the US is not robust, with stations from networks such as ChargePoint, EVgo (which GM partners with for two free years of unlimited charging for the Lyriq) and Electrify America fewer and farther than Tesla Superchargers, and, anecdotally, also experiences more downtime. The strength of Tesla’s 14,000 US DC fast charging ports, out of a total of 24,000 DCFC ports on any network nationwide, is a clear competitive advantage in the market.

That said, we think the Lyriq is a home run for Cadillac, despite these issues. Legacy OEMs need to bring something different from Tesla and, based on design alone, the Lyriq is the BEV they need to effectively fight for market share. 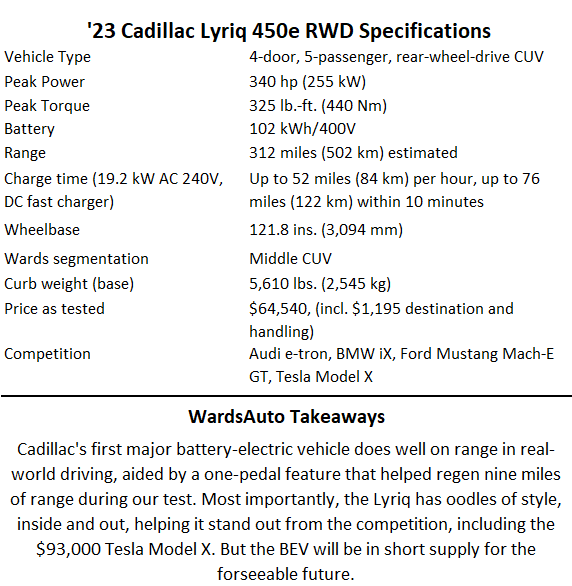